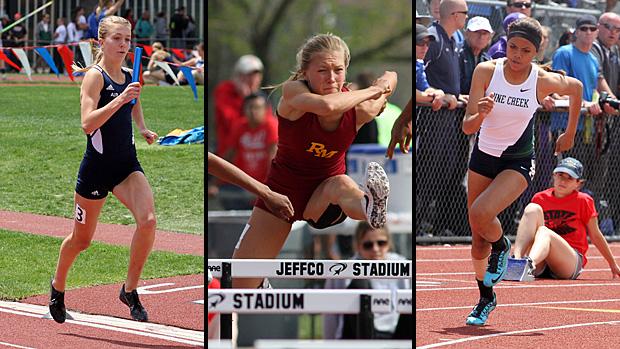 There are plenty of viable candidates for toughest girls event of 2015. Photos by Alan Versaw.

Yesterday, we took a look at the toughest events for 2015. Today, the spotlight shifts to the girls. And there are some dandy contests coming down the pike:

Try to wrap your mind around 12 returning girls under 25 seconds (okay, make that 11 since Ashley Miller moved away). That list even includes a pair of sub-24s in Ally Watt and Michaela Onyenwere. Nicole Montgomery very nearly broke 24. Carly Lester has charred a couple of indoor tracks over 200 meters this winter.

Chasing these will be folks like Shayna Yon, Kayla Pinnt, Audra Koopman, Damajahnee Birch, Haley Rogers, Jordan Edmonds, Alexis Groce, and perhaps an incoming freshman or two. And, don't forget about Heide Baron.... Literally, it could take a sub-25 just to get to finals in 5A.

Okay, 200 meters is too short for you? How about 400 meters? We get six back under 56 seconds, though we may not see Ally Watt running the 400 this spring. In that case, the sub-56s we get back include Nicole Montgomery, Damajahnee Birch, Kamryn Hart, Becca Schulte, and Brynell Yount. Mia Coats just missed that cut, but isn't to be ignored, nor is Heide Baron. We go 17 deep at sub-58.

This isn't your girls 400 meters of a decade ago. If you've been coaching that long, you don't need any reminders of that fact.

If your tastes run longer still, you might be inclined to consider the 1600. Five return with times of less than five minutes--six if you include Tabor Scholl's 4:58 mile last summer in Boulder. Joining Scholl as sub-5s are Katie Rainsberger, Lauren Gregory, Jordyn Colter, Megan Mooney, and Riley Cooney. We'll take it for granted than an unbooted Mooney will be catching up on lost time.

This could get very intense. It's already very competitive. A total of 12 return at under 5:10, and you can bet they're all champing at the bit to get at one another. Mullen might be a good meet to see an early convergence of the top stars.

This one lost some luster with the departures of Ashley Miller and Ashlyn Nolan. But, Ashes to Ashes and dust to dust, this is still a good field, made even better by the timely arrival of freshman Emily Sloan. Sloan has already beaten Carly Lester on the indoor 60 meter hurdle circuit.

Joining Sloan and Lester on the list of top contenders are Kiana Gomez, Zoe Gilbertson, Rhyan Pettaway, Marlee Brown, Maya Ries, and Miranda Mathiason. Unless you're Rock Canyon, it's a bad year to be needing big points out of the 5A Girls 110 hurdles.

Not so much so in 5A, but each of 2A, 3A, and 4A have at least one returning shot putter over 40 feet. It may happen in 5A, too, but right now the other classifications have the upper hand, wrist, and forearm on 5A.

Eaton sophomore Tarynn Sieg owns the top spot coming in at 43-4.5. She'll be pursued by Courtney Clark, Nina Thomas, Eboni Nash, Haley Showalter, and Morgan Hartigan. Adding to the 3A logjam is Britni Allen, who came up just a little short of 40 feet last spring but could have a potential girls team state championship brewing in her motivation teapot.

Stand back and let the cannonballs fly!

We get 14 back at 5-4 or better, but you might want to pay special attention to Rampart, where Ashlyn Hare and Kiara Kearney get to deal with each other on a daily basis. They're at 5-8 and 5-7.75, respectively, now and 5-10 seems very much within the realm of possible.

Joining the hunt at close range, though, would be Alli Davis, Mackenzie Pettit, McKayla Bauer, and Kylie Chavez.

On any given day, it's hard to know what you're going to get out of the high jump, but this group certainly has the potential to put on a great show at the state meet.

We end our tour of possibilities at the long jump. As if getting 18+ jumpers Audra Koopman, Alli Davis, Amazing Ashby, and Kiana Gomez back wasn't enough, Maya Evans joins the fray as a 19+ freshman. And, your memory should be long enough to remember when Shayna Yon was ripping off 18-foot jumps meet after meet. Amelia Harvey has gone over 18 this indoor season, as has Lesha Essien. I'm not sure we'll see Essien this spring, but I'm also not sure we won't.

In any case, it would appear we're starting to get a critical mass of 18+ long jumpers.

Now comes the hard part. Which event figures as the toughest this spring? This one isn't easy, as you could make great cases for a lot of these events.

I'm going with 200 meters as toughest and 1600 as a close second. And, I'm not going to spend much time discussing either selection as doing so is likely only to get me into trouble. If you'd like to discuss further, the forum is a great place for that. :-)