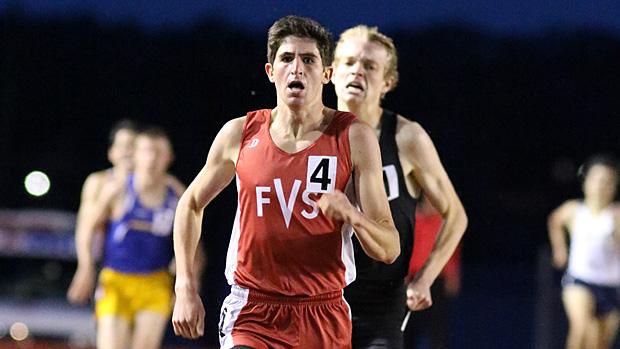 Dom Carrese pounds the final meters of the Pueblo Twilight 1600 with William Mayhew in tow. Photo by Alan Versaw.

Easily the most thrilling race of Friday night's Pueblo Twilight was the top heat of the boys 1600. Featuring a different leader at the end of each lap, most in the stands and on the field figured William Mayhew was putting the race to bed when he took over on the third lap.

Dominic Carrese, however, had other plans. Hitting the gas hard with 200 meters to go, Carrese overtook the Cheyenne Mountain senior and wrote his own ending to the story in 4:14.50.

Race video, photos, and a much more in-depth story of the meet coming later today!