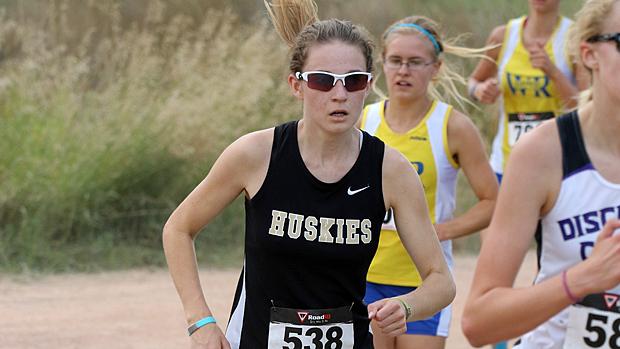 After taking one on the chin to Air Academy on Friday, Megan Rossman and her Battle Mountain teammates could be loaded for bear this weekend. Photo by Alan Versaw.

The first weekend of official cross country action for 2015 is now behind us.

We have to wait until Wednesday, however, for this week's action to roll off the starting line. In the grand scheme of things, Wednesday's meets are relatively minor, but they will serve to get the week's action kicked off nevertheless.

Across the border in Utah, Dolores, Mancos, and maybe Montezuma-Cortez, will take on Monticello's Loyd's Lake Classic, one of the higher elevation cross country meets in the nation at about 7100 feet. To be honest, it looked a little like Mancos was keeping a tight lid on the effort level at Friday's Cheyenne Mountain Stampede, so perhaps closer to home and away from so many eyes they open things up a little. Dolores looks to be opening the season with what should be the largest team the school has had in the short history of the program.

And, in Denver's showpiece Washington Park, Denver South will be hosting a two-mile event known simply as the Wash Park Invitational. At this point, we're expecting a very small meet despite the attractiveness of the location.

The week's schedule gains a little momentum on Thursday with the Joe Davis Classic, hosted by Vista Ridge at Monument Valley Park, and the Ponderosa Stampede, hosted at Salisbury Equestrian Park in Parker.

The JDC figures to be a mid-sized meet, drawing heavily from the Colorado Springs area, but with enough gravitational pull to yank Lyons out of their usual northerly orbit.

The Ponderosa Stampede is hosting more than 20 teams this year, after successfully beating back the rain in last year's debut edition of the meet. There's a lot more heat than rain in this year's meet day forecast.

If you're a coach, one of the cool things about the Ponderosa meet is that you don't have to pick a varsity roster for this one. Freshmen and sophomores run in the FR/SO race, while juniors and seniors run in the JR/SR race. That kind of sorting mechanism works very nicely early in the season when you're still trying to get comfortable knowing the capabilities of your athletes.

That exhausts your options if you want to get your meet in before the Labor Day Weekend begins, but there are plenty of options remaining if you don't mind scheduling a meet over the holiday weekend.

On Friday, you can take your pick between Arapahoe (but it's way too late to get into this one), Delta, Horizon, and CSU/Frontier Academy.

If plunging through urban watercourses is your thing, Arapahoe is your pick.

If you like racing on a drag race strip, consider Delta. Just make sure to safely deploy your parachute once you cross the finish line.

If you enjoy the olfactory experiences (and they're not all bad) associated with county fairgrounds, try out Horizon.

And if you've ever been to a football game at Hughes Stadium and wondered what it would be like to race around the parking lot, then you need to try out the CSU/Frontier Academy meet. The one time I went to a football game at Hughes Stadium, I got safely in and out without sensing any urges to go running around the parking lot, but I also realize not everyone responds to stimuli exactly the same way I do.

Evidently, the Hughes Stadium option is working out well for a lot of folks. Nearly 20 high school teams are registered for the meet after a much smaller debut effort last year.

Arapahoe, of course, will be huge--just not as huge as last year. We've talked about that situation already on this site. Despite the team cap, however, there is still a very nice cross section of the best teams in the state pointed at deKoevend Park on Friday.

Delta is always a big draw, and the forecast for where the Gunnison and Uncompahgre rivers join forces is looking a little less intense on the heat scale than it's capable of being this time of year. The heat might get turned back up a little, though, when the Durango bus pulls into the parking lot.

Horizon is promising popsicles to all comers, but you nee to finish your race quickly before the popsicles melt. A still-solidly-frozen popsicle is a whole lot more enjoyable than a sticky, drippy mess. Oh, and don't bother to read the list of ingredients--you don't want to know.

Gunnison travels to Albuquerque, New Mexico, to hold down the Colorado representation at this year's running of the UNM Lobo in Albuquerque. Gunnison has a couple of promising freshmen joining the ranks of established seniors on their roster this fall and could end up showing very well in the Land of Enchantment.

Closer to home, Rocky Ford and Alamosa divvy up the southern Colorado teams. It appears at this point that Alamosa (in truth, the meet is hosted by Adams State, but can be safely tagged as a home meet for Alamosa) is getting the larger draw of teams. Indications are that Lamar is headed straight past Rocky Ford for this one. Perhaps this time we get a rematch with Isaiah DeLaCerda in the field? To further sweeten the pot, at least three solid teams are coming north out of New Mexico to join the festivities. There's a lot to look forward to at this meet!

Centaurus is staking its claim to the northern Front Range teams. If Devin Rourke wanted a massive meet, he now has all of that. Counting middle schools, this meet is now at around 40 teams. That's a lot of humanity to shove into Waneka Park. Not surprisingly, this one figures to be very competitive, and perhaps especially so for those schools not involved in opening weekend action.

For those whose tastes in cross country qualify them for the mountain running circuit, options split this weekend between Lake County and Battle Mountain. Battle Mountain has the bigger of the two meets, but don't be quick to dismiss the interest factors attending the Lake County meet.

Lake County is as long in history and folklore as just about any meet in Colorado, but the course did change a generation or so back and now run circles around Colorado Mountain College instead of the local golf course. And, at 10,200 feet, I do believe it qualifies as the highest regularly-run cross country course in the nation. Folks actually come here to suffer. Coronado does it every year. Cheyenne Mountain appears to be on this year's list of attending teams (although they are also listed for the Battle Mountain meet). And, unless I've miscalculated, we get to see Tyler Scholl's high school debut at this one.

A few miles on the other side of Tennessee Pass, Battle Mountain hosts their own version of the meat grinder at the base of Beaver Creek Ski Area. I'm actually not sure how Rob Parish keeps folks coming to this meet as the Huskies have been know to eat people alive on this course. And, it could get even uglier this year if Battle Mountain's performances at the Cheyenne Mountain Stampede are any indication of what this program has going for it this year.

Rounding out Saturday's schedule is the Widefield Invitational on a deceptively tough course nestled into Widefield Community Park. You think you're going to run fast when you arrive only to have the reality of the unending climbs settle in at about two miles. But, the location has helped make an impressive team out of the once lightly-regarded Widefield Gladiators.

So, where will Colorado Track XC be on-site with coverage this week? We'll be at the Ponderosa Stampede, the Arapahoe Warrior, the Joe Vigil (Adams State), and Centaurus. Our coverage of the Centaurus meet will include the rapier wit of Ben Hershelman. Ben has a keen eye for the absurd, so be careful to conduct yourself with decorum at that meet if you're there.

Keep checking back for results and coverage all weekend long. And, if you're at a meet, feeling like it's not getting the coverage it deserves, and you just happened to grab a nice image or two of the action, please feel welcome to send those images along. No promises, but I always try to find a way to use those images.