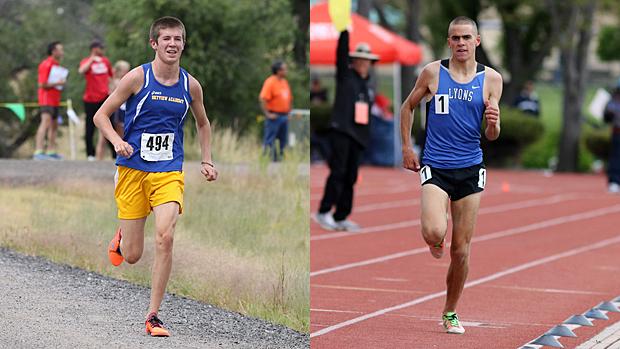 A lot of eyes will be fixed on the spectacle when the paths of Ben Butler and Paul Roberts cross at 9:05 AM on Saturday morning. Photos by Alan Versaw.

Last week, when discussed the Joe Vigil Invitational, the featured meet of the week, I split the meet down the lines of gender. This time, it makes more sense to split the discussion as Lyons splits it--by classification.

We'll begin by noting that the Estes Park girls are planning to run up in the 4A/5A division. While Estes Park would be a reach to win the 2A/3A girls title at this meet, the departure of Lily Tomasula-Martin to the 4A/5A race does remove one of the primary contenders for the 2A/3A individual title.

But, there's not really a huge shortage of title contenders. With Salida comes Taryn Ceglowski. With Peak to Peak come Anna Shults and Quinn McConnell. Sierra Tucker and CeAnn Udovich of Lyons know the course better than anyone else in the field. In those five, then, you should have the main contenders for the 2A/3A girls individual title. I'm not sure Shults has ever beaten McConnell, but she's at least proven she can keep it close.

There will be no small crowd clambering for places six on down, with perhaps one or two of that crowd having a big race and slipping into the top five.

Team competition scores four at this meet, splitting the difference between the 2A and 3A standards. At this point, you'd probably need to take Salida as your favorite, but with scoring only four, Peak to Peak becomes a more serious potential threat to the Spartans. A lot of head scratching will begin forthwith if Peak to Peak manages to pull off the upset.

As we start thinking about the 2A/3A boys race, I can't help but marvel out how great the Western Slope representation at this meet is. It's a huge deal for Mancos, Telluride, and Ouray to be making the trip over for this meet. Salida, Lamar, Vanguard, and SkyView Academy highlight the 3A representation here, but the 2A representation is simply outstanding--including Lyons, Rocky Ford, and Heritage Christian Academy along with the Western Slope power programs. We simply will not see another 2A rendezvous this good until the state meet.

An intriguing side story to the 2A/3A competition lies in the meeting of Lamar and Vanguard. Lamar is, beyond question, a 3A title-contending team this fall. Vanguard can make their case as a contender in a compelling way if they come out of this one holding their own against the Savages.

To date, Mancos hasn't shown much, and I'm guessing that's by design. But, it's hard to justify a trip all the way to Lyons if you aren't coming to actually race with big dogs.

We should also get to find out just how good Heritage Christian Academy is. Are they a newcomer to the circle of the 2A elite, or are they still a year or more away?

The individual race should be something to behold between Ben Butler and Paul Roberts. Butler has never beaten Roberts in a straight-up head-to-head race, but it's not beyond the pale of possibility that it happens Saturday. Regardless of the final outcome, it should be a very, very good race. And, this is likely the only time this showdown happens this year.

Chasing Roberts and Butler figure to be guys like Taylor Stack, Jack Plantz, Cody Danley, Ro Paschal, Jake Rogers, and possibly two or three more. Oops! We might want to include Middle Park's Tyler Scholl on that list as well.

As you pack for the trip to Lyons, bring your water, your sunscreen, your sunglasses, your cowbells, your camera, your $5 (or more, if you'd like to donate more to the cause of Lyons rebuilding) for parking, but please don't bring your dog. Lots of folks enjoy dogs, but not everyone enjoys your dog like you do--and the St. Vrain Valley Schools have a district-wide policy prohibiting dogs on school grounds.

For those wondering, I'll be busy shoving data into the MileSplit computer after the racing is done to:

3. Do a complete scoring (run 7/score 5) of all classifications combined.

4. I also hoping, not yet promising, to do a credible "time equity adjustment" on Liberty Bell and St. Vrain and score combined results for each classification from the two big races of the weekend.

Those analyses will appear as premium content in the days following the meet. They should start appearing on Sunday and perhaps continue appearing as far out as into Tuesday.

Colorado Track XC will be running two video cameras at the meet, so race highlights should be more extensive than normal. If I can wedge a couple in without compromising coaching responsibilities, there might be an athlete interview or two to post as well. But, I can't promise the latter.

Look for start lists to come out later this week!

(all the information you ever wanted about this meet)