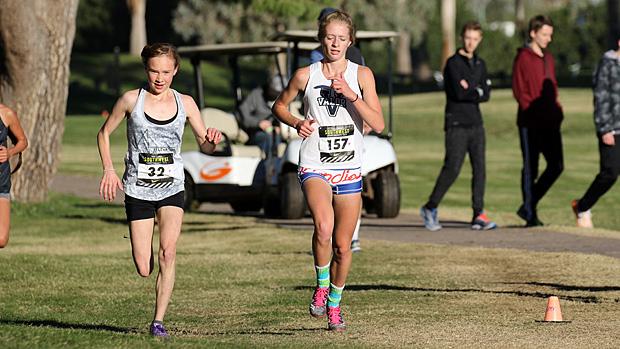 Maya Smith and Reagan Hausmann kept it close the almost the entirety of the small-school girls race, with Hausmann prevailing on a late surge over the final 200 meters. Photo by Alan Versaw.

On this day, the Southwest region became the first Nike region to contest a small-school championship and organize small-school races by school size.

As the small-school presence at NXR-SW (and other Nike regions, for that matter) became increasingly restricted to open races, a decision was made to let the small schools contest their own regional championship.

This year's small-school races boasted about 15 teams each. While that's not a great number, it is a decent number of teams for a championship race and helps to demonstrate the viability of the concept. Figure on an enhanced number of teams next year as more teams plan on participating next year.

For this year, however, The Classical Academy out of Colorado Springs overcame some setbacks incurred during the season and raced to a sweep of the team titles.

In the girls race, it figured to come down between Page (AZ) and Salida (CO). Both came in as state champions, Page in Arizona's Division 3 and Salida in Colorado's 3A. Both competed very well. Among those runners competing directly in the Small-School race, Salida's depth overcame a strong presence by Page toward the front of the field and a seventh-place finish by Lara Yazzie to finish the race eight points up on Page and a few more points up on The Classical Academy.

But, TCA's Chantae Steele still had yet to compete in the Girls Championship race. Steele's 18:15 in the Championship race later in the morning placed her third in the small-school race, and easily pushed TCA past both Page and Salida. The final team tally left TCA with 74, Salida with 88, and Page with 96. No other team was close to that range.

Individually, Reagan Hausmann of Valor Christian (CO) took the win with a very late surge that just pushed her past Maya Smith of Northland Prep (AZ). Hausmann's winning time checked in at 18:07.

A very similar situation played out in the boys half of the small-school championship.

This time, however, both Battle Mountain and TCA had an entry in the Boys Championship race, leaving two teams in control of their destiny in one of the showcase races of the event.

TCA's Tanner Norman finished 12th in the Championship race with a 15:14, with Battle Mountain's Alexis Aguirre several seconds back at 15:40. Perhaps a bigger factor than their times (which went 1-2 when entered into the small-school race), however, was the fact that Norman's race removed a much higher point value at #5 for TCA than Aguirre was able to remove for Battle Mountain. 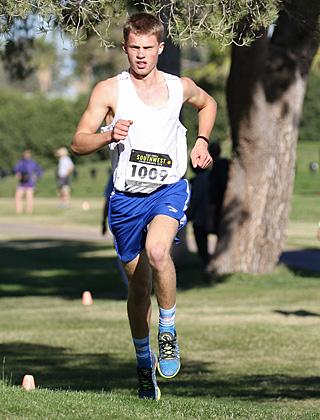 In the actual small-school race, Jerald Taylor (photo, right) of Custer County (CO) ran easily his best race of the season to win in 15:59. Taylor's previous best was a 16:51 clocked at Liberty Bell. TCA's Michael Oldach finished second in 16:10.

It appears as if Salida's Taylor Stack was overlooked in the conversion of Championship race times to the small-school race. Stack's 15;15 would have left him just behind Norman in the overall small-school individual standings, but would not have made Salida a top contender in the team tally.

If the NXR-SW small-school race can grow at anything approaching the rate at which the Championship races have grown over the last eight years, these should become very competitive races in short order.