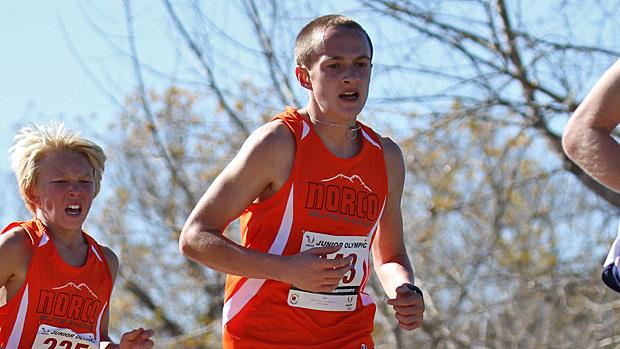 Cole Sprout and his NORCO Elite teammates will be looking to create some consternation in Albuquerque on Saturday. Photo by Alan Versaw.

Albuquerque's Balloon Fiesta Park will play host to the National Junior Olympic Cross Country Championships. And, given the proximity to Colorado, it's not entirely surprising that Colorado will be nicely represented in the Duke City this weekend.

Since most of Colorado's high schoolers who were doing an extended season were in Arizona on November 21 when the regional qualifying meet was held, the list of high school talent from Colorado is very short, but starting with the 13-14 age bracket and moving on down from there, this meet is loaded with several of the top individuals in Colorado.

Aidyn Woodall will be going for back-to-back national titles in the 11-12 age bracket. Presumably, the 5000 feet of altitude in Albuquerque is something Woodall is accustomed to and therefore should play in her favor. She may not need many favors, though.

NORCO Elite cobbled together a formidable boys team in the 13-14 age division with names like Cole Sprout and Isaac Roberts making the trip in their colors.

Joslin Blair, a convincing regional champion on November 21, returns to Albuquerque for a shot at winning the national title in 13-14 girls.

Adugna Moritz and Erik Le Roux were 1-2 in the 11-12 regional race and figure to renew that battle at or near the front of the pack for nationals. Hogan Boyle and Nathan Pontius will be breathing down their backs if both aren't on top of their races.

Brooke Wilson was every bit as dominant in the 9-10 division at regionals as Aidyn Woodall was in the 11-12 division and figures to be another Parker Panther threat to run away with a national title. Jackson Parrill narrowly lost the 9-10 boys title at regionals and may figure on trying to even up that score at nationals.

So, yes, if you can tune your attention to a slightly younger set of kids, there is a lot more to this weekend than Foot Locker Nationals.