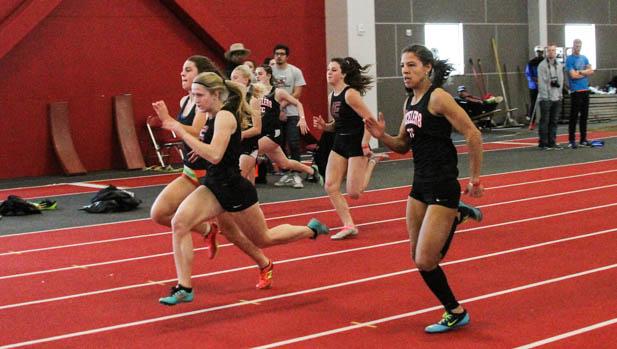 Tegan Alexander closes in on the finish line in a blazing 7.73 in the 60 meters finals Saturday at Western State. Photo by Daniel Russell.

Almost from the moment I got home yesterday, I've been hit with questions about the 60 meter dash and 60 meter hurdles times from the Western State High School Indoor Open. Questions have even arisen from the national level. As keeper of the Colorado MileSplit database, I get to deal with those questions.

Without a doubt, those times caught a few folks' eyes. And the eyes caught were not just the eyes in Gunnison on Saturday.

So, let's try to address those questions...

1. Were those times exceptional?

At least for some athletes, without a doubt, yes. Jay Shuman ran 8.10 and Max Gilbertson 8.16 for the 60 meter hurdles. For both athletes, those are monster improvements on both PR and season-best marks for the events. And, they also both broke PRs in prelims. On the other hand, the times for Jake Morse (who ran an 8.80 set of 42s at Mines earlier this winter) and Matt Hanson were not exceptional for either.

The 60 meter times, twice over, for both Chris Youngs and Jordan Xiong wandered well into the field of exceptional. Times for others in the boys 60 meter dash final were either exceptional or come with too little previous data to make that kind of judgment.

On balance, then, there was a high number of exceptional times, but not all times were exceptional.

2. Does the elevation at Mountaineer Field House have anything to do with this?

Without a doubt, yes. The idea here is that there is less air pressure at higher elevation, so the air is slightly easier to move through at high rates of speed.

But, it's probably the case that the less-dense air at 7770 feet doesn't account for all of the difference that we see in the "exceptional" marks. For qualifying purposes, the NCAA assigns a .04 penalty to 60 meter dash and 60 meter hurdles times at Mountaineer Field House. If a .04 penalty would bring these times back into line, we wouldn't be using the word "exceptional" in this discussion.

3. Could there have been a timing system problem?

Furthermore, I'm not aware of how a FAT system failure could lead to fast marks. No marks? Yes. Fast marks? Well, it's less than clear how that could happen.

A closely-related explanation could lie in how the images were read. I don't know if Western State uses manual or automatic reading of the FinishLynx images, but I do make the assumption that they know what they're doing when reading images, unless it was done manually and they had an untrained reader on Saturday morning.

But, I do know the degree of exceptional that we are talking about in a few of these cases isn't the kind of exceptional you'd get out of not placing the line on the image in just the right place.

I also have a strong sense that I could be out of my league in the response, so if anyone who has more knowledge of reading finish line images than I do cares to drop in, I will welcome your contributions!

4. Are there other explanations?

Maybe, but I'm probably not the bottomless well of theories you may have been looking for.

I think we can rule out the possibility of wind-aided marks. Nobody leaves doors open in Gunnison during the months of winter, much less two large doors at opposite ends of the building.

The timing system starts with the firing of the starter's pistol. That much is a given, and it starts at the same instant for all competitors in a heat. The place you might be able to squeeze some "advantage" out of the times in a race would be if false starts were not brought back or if the starter's rhythm was exceptionally favorable to (some of) the competitors.

Maybe, just maybe, the rhythm of the starter was ideal for the racers. I do know it seems, subjectively, that some starters have a better sense of when to fire the pistol than others. I would definitely not regard it as outside the bounds of a fair question to ask if the sprinters and hurdlers, or at least a good number of them, found a very favorable starter on Saturday morning. Combine that with the altitude adjustment and maybe you begin to have a workable theory, though I have no means at the ready of going back and testing the theory.

One other theory worth bringing into play as an explanation is atmosphere. As a distance coach, I'm used to seeing this. Sometimes, the right field comes together at the right time and you get an exceptional set of results. Normally, this is thought of as a distance phenomenon, though, as just-right pacing of the race comes into play with this theory, as does oxygen density. There is no pacing of the 60 meter dash or 60 meter hurdles. And, oxygen density simply isn't terribly relevant to the most anaerobic of anaerobic races.

But, could there still be an electric atmosphere that sets the adrenal gland of a few competitors on edge? I don't see why not, and some things (at least) about this meet would seem to lend themselves to such an explanation. And, once word starts to get out about great times, more adrenal glands start firing.

This is still a new meet with a lot of energy--and more energy this year than last due to the larger crowds. It's beyond question that you walk into the Mountaineer Field House and expect big things. It's just such a nice venue for indoor that you want to, and expect to, do well.

In the absence of any very compelling alternative theory, I believe the times posted are legitimate. My hunch is that the less dense air, the atmosphere, and the starter's rhythm all likely (or at least possibly) played roles, but none of those three explanations produce illegitimate times. All three of those items are simply part of track meets.

I've seen a few major controversies in my tenure here, but this doesn't seem to have all the right elements to join that list.