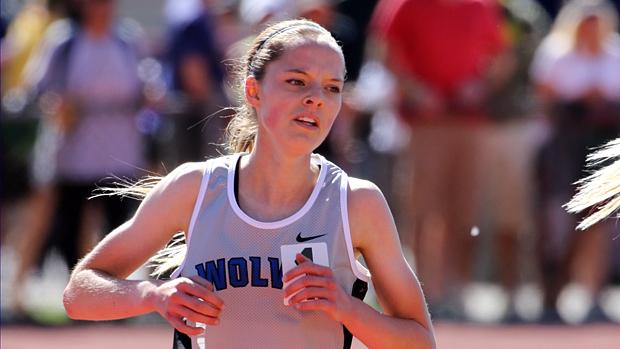 Brie Oakley reintroduced lapping runners to the 5A 3200 en route to a new classification record in the event. Photo by Alan Versaw.

One presumptive team favorite enjoyed a very solid day, while another struggled a little coming out of the gate.

For Cherokee Trail's boys, it's going to be important to right the ship on Friday. Things did not go as well for the Cougars as they could have.

KJ Sapp advanced in the 100 and 200, and as part of the 4x200 relay. But, Sapp managed only two points in the long jump. While that doesn't mean the title hopes are a lost cause, it does mean CT is not in as dominating position coming out of day one as they could have been. Further complicating that scenario is the fact that Regis Jesuit's Austin Campbell eked out a high jump first place over CT's David Thornton. Ta'Mar Wilson added four points in the long jump.

But, the discus didn't go as well as it could have for RJ, and so the Raiders are not in as opportune of a position as they could have been. A nice second place for Jack Davidson in the 3200 and 7.5 points in the pole vault helped, but Austin Campbell's three points in the long jump may not have been all RJ was hoping for. In short, it was a mixed day for Regis red.

A scant point is all that is tallied in the Fountain-Fort Carson column thus far, but Christian Lyon, Donovan Williams, Malic Bonner, and the 4x200 did absolutely all that could have been expected of them in the 100, 200, 400, and relay. The Trojans have to be at least mostly pleased about their day.

For the girls, Fort Collins' title hopes got a boost from a nice showing in sprint prelims, a seventh for Lauren Gregory in the 3200, and a first for Audra Koopman in the long jump, followed by a fourth for teammate Kailey Peterson. Jasmine Chesson and Becca Schulte both advance in both the 200 and 400. Kelly Ervin and Emma Dern earned a total of three points in the discus.

For Arapahoe, both sprint relays advanced nicely, Julia Hall advanced easily in the 200 and 400, the 4x800 eked out a ninth, the 100 hurdles qualifiers were shut out, and Hannah Carlson earned a sixth in the long jump.

Elsewhere, Brie Oakley erased Melody Fairchild's name from the 5A 3200 record with a blazing 10:33, Emily Sloan and Zoe Gilbertson set up a much-hoped-for 100 hurdles final, Chloe Woest closed out her high school pole vault career with a PR, and Gina Coleman took top honors in the discus.

Among the boys, Max Manson pushed Connor Roberts all the way to 15-7 before bowing out of the pole vault. Roberts would win with a 15-10. David Cunningham added to the Highlands Ranch jump legacy with a long jump title, and Henry Raymond played the tactical game en route to a 3200 win.