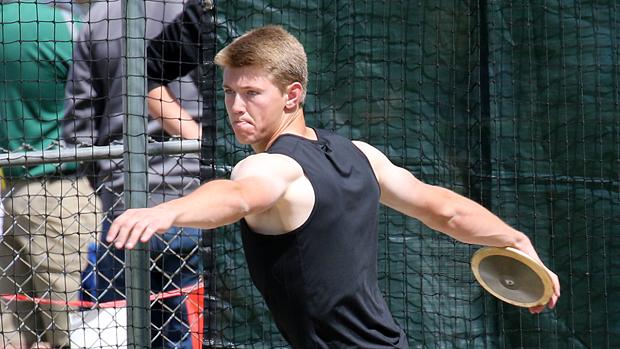 Adam Dawson took the state by storm in the discus last spring, reaching a best throw of 180-0. Photo by Alan Versaw.

I know you've been working with former CSU coach Del Hessel on throws. How influential was that relationship in you ultimately making the choice to throw at CSU?

Coach Hessel was a great sounding board and mentor for me as I went through the college recruiting process. He didn't really push CSU, but his experience at CSU as an athlete and head coach did initiate my interest in the school. Once I started doing my own research on schools, it became more of my own choice and Del was less influential. The biggest factor was really when I did some camps up at CSU and started developing a rapport with Coach Bedard and felt really comfortable with him. Once I had visited some other schools (Illinois, Nebraska, and Kansas), I knew that CSU was the best fit for me from a location, coaching, teammate, and academic perspective. I'm excited to stay in state and compete for CSU, and I know Coach Hessel is excited for me as well.

What do you plan to study while at CSU?

I was accepted into the construction management program, but honestly I'm still relatively undecided about what my major will end up being.

If I'm not mistaken, you started out high school sports--at least in the spring--as a baseball player. How did you end up becoming a thrower out of that?

I did start out high school sports as a baseball player. After my freshman year, I decided to add track as a way to get more versatility in my training and to learn some new skills. I began working with Coach Hessel that summer and due to my frame and strength, he suggested I look at the discus and javelin. I progressed quickly and Coach Hessel saw a lot of potential in me. However, It wasn't until my first track meet the spring of my sophomore year, that I realized I could possibility compete at a high level in throws. I continued to work on the throwing events but playing baseball was my priority until this past summer, when I began concentrating more on the throwing events.

It's hard to say which is more fun. I like them both and now that I'm learning the hammer throw, I really like that as well. Javelin is probably the hardest event just because there is so much technique involved. Plus it is so different from throwing a baseball that it's a really hard adjustment between the two sports.

Does your work on throwing technique take you beyond the typical boundaries of the outdoor track and field season?

Working on throwing for me now involves a 4-5 day/week strength program as well as 2 times a week of throwing work. Right now increasing my strength and weight are big priorities along with continuing to make progress on my technique.

What goals do you have on the table for your final high school season of throwing?

Team wise, I would like to help Lutheran High School do as well as we can at State, maybe win their 4th straight team championship. Individually, my main goal is just to get my technique more consistent throughout the season. I would like to win State again in the discus. I'd also like to see if I can get into the top five all-time discus throws in Colorado. I may try to throw javelin and hammer in some out of state meets this spring, if it works out. Goals for those events are primarily around improvement of technique in preparation for college.