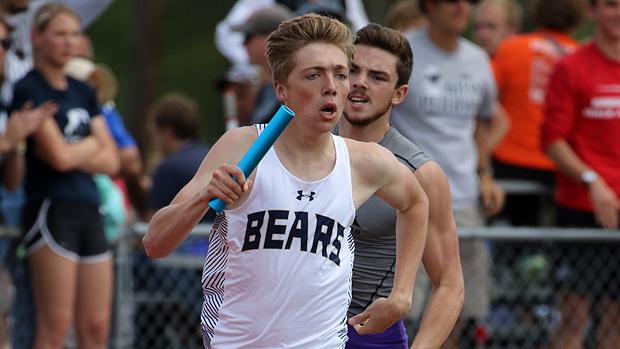 Drew Lester and his Palmer Ridge teammates once again have high hopes for this year's 4x800. Photo by Alan Versaw.

Tell us first about what made the Air Force Academy the logical decision for you.

Both my parents were Air Force Captains so I've grown up in a military environment. Beyond that, the opportunities to get a first-rate education, run for a top-tier distance program, and join something bigger than myself as an officer in the Air Force after graduation was something I couldn't pass up.

What is your planned course of study at the Academy?

I'm really interested in physics, so at the Academy I hope to pursue a degree in aeronautical engineering.

Palmer Ridge obviously handled the coaching transition very nicely this year. How difficult was it adjusting to the changes of a new head coach?

Coach Rudnicki has been coaching as an assistant for the whole time I've been here so when he stepped up as head coach the transition was pretty smooth. The team did a really great job rallying around Coach Rudnicki as the new head of the program and I think that, along with his leadership ability, really shows in the success we've had this year.

Of all the events and distances you've participated in over the years, which event or distance counts as your favorite, and why?

I fell in love with the 1600m my Junior track season. I think it has a nice balance between speed and endurance that really favors my racing style. That being said, the team component of cross country has to be one of the most rewarding experiences of my high school running career.

Pick a favorite moment for us from your high school career.

In September, the team flew down to Irvine, California, to race at Woodbridge. We weren't quite sure what to expect, but we were definitely ready to throw down. Finishing that race and looking back at the score board to see the results would have to be my favorite moment. Beating respected national programs like Great Oak and Southlake Carroll was a huge turning point for the team and really set us up to have a phenomenal rest of our season.

What's left for you--or the team--to accomplish in your final high school season this spring?

This track season individually I'm looking to set some quick times and place top three at state in the 800m and 1600m. In terms of the team, our goal is to take back the state title after falling short of our three-peat target last year. I know we're especially emphasizing winning back the 4x800m crown after we got edged out by Durango last year. Caleb Ojennes, who graduated last year, obviously contributed a lot of points in sprints at the state meet the last few years, but the guys on the distance side have really stepped up so I think our goals are certainly within reach.