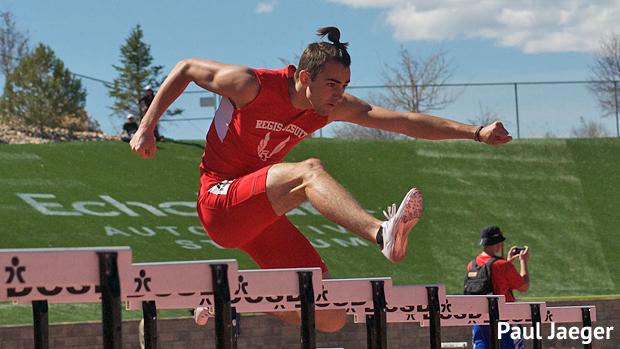 The season always begins with fits and starts. There was plenty of both at the ThunderRidge Invitational on Saturday. We'll take a look at a few of the highlights here, starting with the boys on this page and the girls on the next.

The first sub-39 300 hurdles of the new season came unexpectedly early, on opening weekend. But, it's still a nice sign any time you see sub-39s in March. Jason Lewis, the multi-talented Regis Jesuit athlete, picked up onE of his own with a 38.95.

Denver East's Joseph Abiakam picked up another hurdle highlight with a wind-legal 14.88 winner in the 110s. Abiakam's winning hurdle effort was part of a larger stand-up-and-take-notice by the Denver East team. Coming out of this meet, Denver East starts to have the look of a state title contender. To wit:

What's lacking for Denver East at the moment is a solid field event presence. You can't simply wish field events into existence, but if one or two come around for the Angels, this could become a special year.

Chaparral's Connor Quinlan put himself on the pole vault with a 14-6 clearance. That's not yet in the territory that will rival Max Manson, but it is in the kind of territory that scores a few nice points at State.

And, as it turns out, this meet provided a nice showcase for a large number of freshman athletes. Some of the freshman boys making bigger splashes included:

Click on Next to continue to the girls notes.