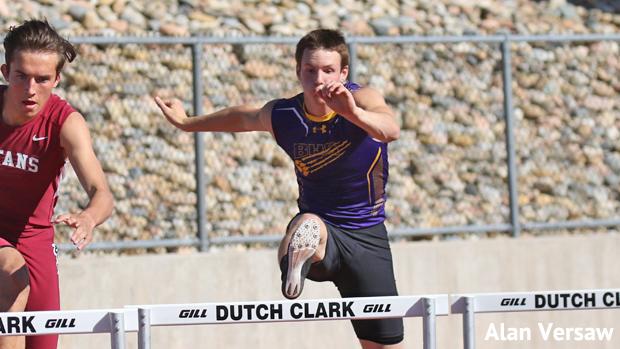 You see, Eaton eliminated Lutheran from the state baseball tournament, freeing a small handful of speedy Lutheran sprinters for duty at the state track meet. That's the way the bat breaks.

You can almost see Darwin Horan smiling, but he's probably circumspect enough not to do it in public and to deny all charges.

But, the fact remains that Christmas came early for Lutheran track and field this year. A team that was already a very large favorite may have become a prohibitive favorite, all in a couple of innings on Saturday.

That leaves teams like Bayfield, Elizabeth, The Classical Academy, Sterling, D'Evelyn, and Manitou Springs to duke it out for a smaller and different tinted trophy. Be assured this figures to come down who can pile up the most nickel-and-dime kind of points. The teams are that close on paper.

TCA has the most upside potential on relays. D'Evelyn has recent momentum in their corner. Sterling is (almost) all about field events and will need things to go well in spite of what could be at least intermittently wet conditions. Elizabeth needs their sprint relays to come through big. Bayfield has team balance working in their corner. Manitou Springs has three big guns. If any of the three don't fire, they're probably out of the hunt.

But most of what is intriguing about the 3A Boys state meet comes down to individual events and event titles.

Can Sunday Abarca sweep the sprint titles? The 200 and 400 seem comparatively safe for the Aspen standout, but Wesley Tedstrom and Nick Ciccio threaten for the top spot in the 100.

Can Tanner Norman add another record to his list? The 3A 1600 looks to be a bit out of reach, but the 3A State 3200 is clearly within striking distance.

Carl Heide vs. Mason Anthony looks like a delightful showdown in the 300 hurdles.

Strasburg looked to have a pretty tight grip on the 4x200 until Lutheran got the baseball gift. At this point, though, Lutheran should be able to lock and load both the 4x100 and 4x200. Strasburg has a fight on their hands. Sticks will be very important (but you already knew that).

The 4x800 should prove to be very tight. It's going to take a lot faster time than the seed marks to win it. Who will be ready to go on Thursday? Alamosa has recent history in their corner, but the field hasn't been this close in a long time.

Corbin Mayes went a lot higher than 14-10 in indoor season, but Victor Zimmerman owns the top seed in the pole vault. Weather conditions could put a bit of a damper on the heights attained this weekend, but the competition figures to be close even so.

Jacob Dack owns, by far, the top shot put mark going in. But, with three other big dudes over 50 feet, this one still might prove to be interesting. Shot put is a deceptively technical event that the state meet has been known to mess with in the past. Dack, at least, has plenty of experience in the state meet ring.

Wesley Tedstrom versus Justin Thompson in the long jump should be worth the price of admission as well. Tedstrom's season has come together very nicely in the last few weeks and probably should be reckoned as the favorite, even if seeds are sometimes deceptive. Roaring Fork never brings a lot of individuals to the state meet, but they do seem to have ways of getting jumpers through to the big show.

It's been a long time since Montezuma-Cortez boasted a state champion, but Austin Wagner just might fill that role in the triple jump. Josh Ramos is another such possibility in the 800. And, at least two Panther relays just might find themselves in the hunt as well. So far, the move down to 3A has been very good to Montezuma-Cortez.

See instructions in this article for creating your own 3A Boys virtual meet, up-to-date with all of the scratches!