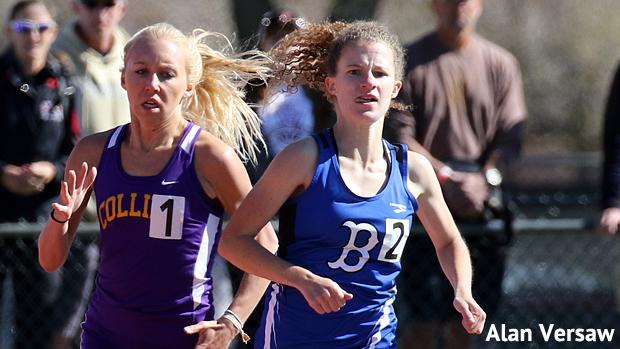 Madison Mooney tries to take her mile PR below 4:47 this weekend in Seattle.

The title of this article is not meant to imply that all high-level Colorado track and field athletes are headed for the coasts this weekend. A good number of them are headed no farther than Echo Park Stadium for a healthy dose of competition at the LIFT Invitational.

But, there are also those headed to Seattle for Brooks PR and to Greensboro for New Balance Nationals Outdoor. This article helps to shed a little bit of light on those stories.

Sadio Fenner - Fresh off a 6:21 winning effort in the 2000 steeple at Great Southwest, Fenner moves on to NBNO for another crack at the event and the opportunity for even greater notoriety. Oxygen density doesn't figure to be working nearly as hard against Fenner this weekend as in Albuquerque a little over a week ago. Fenner is running Colorado's top high school steeple times since Bailey Roth.

Anna Hall - Hall kept things a little less intense by passing over the Great Southwest heptathlon. She competed only in the high jump in Albuquerque, but the hep was still definitely on her mind. This weekend, she takes aim at a second national multis title to go with the indoor title she earned back in March (not to mention a close runner-up finish at Arcadia). She is very much in the hunt for that title. Incidentally, Hall finished 7th here last year.

Michael Mooney and Cayce Reese - A year ago, these two guys weren't on much of anyone's radar screen. What a difference a year makes! Mooney and Reese take aim at the emerging elite mile at NBNO.

Brock Dykema - Dykema was hoping for a better 3200 result at State than the one he got. He gets another chance at (essentially) the same distance in Greesnboro. Managing heat is always a concern at NBNO, but managing the altitude is always a concern in Colorado. This is a big opportunity for Dykema.

James Lee - There are 14 boys in the championship mile at NBNO. James Lee is one of those 14. If you can't get excited about that kind of opportunity, there's not much hope for you. Lee takes his 4:14 1600 from the St. Vrain and sees what he can make of it in North Carolina.

Emily Sloan - Last year, Sloan made the trip to Brooks PR. This year, she attends NBNO. That may have something to do with the fact that NBNO has a 400 hurdles event and Brooks PR doesn't. Sloan has become much more than a 100 hurdles specialist this spring. She is rapidly closing in on being as good at the longer hurdle distance as the shorter hurdle distance. And perhaps she is already there? This weekend might do a lot to answer that question.

Mary Gillett - Gillett is justifiably famous for four-eventing a lot of meets. Not this one. At NBNO it will be all about taking care of 400 meter business. And, it's a fair question to ask--just how fast is Gillett at 400 meters when that is the only event she has to concern herself with?

Lauren Neugeboren - The 1600/Mile is something of a new distance for Neugeboren. Before this year, she stuck pretty much exclusively to 400s and 800s. But, since about the beginning of May, her 1600s have been taking off. She takes on the emerging elite mile field at NBNO.

Zach Litoff - You'll remember Litoff as one of the Monarch distance guys who very nearly stole a team state title out from under Fountain-Ft. Carson. Litoff was a big, if perhaps less conspicuous, part of that. He gets a chance to compete outside the shadow of his teammates at the NBNO championship two mile.

Chris Theodore - Theodore made an enormous jump from his sophomore to junior year of high school. With very bright team prospects ahead for Rock Canyon cross country in the fall, Theodore takes one more whack (well, two, actually) at sharpening the track and field saw with appearances in the emerging elite mile and two mile.

Denver South Boys 4x800 - They ran 7:48.32 during the season. That's certainly enough to raise some eyebrows. Can they match or beat that in North Carolina? There are 37 other teams to contend with (in three sections) for this race.

Note that NBNO entries for Adam Dawson and Erika Willis have been withdrawn.

Mia Coats - This will be Coats' third appearance at Brooks PR. Her senior year has been something of a struggle to replicate previous best marks, and Brooks PR provides a nice opportunity to get healed up a little after the state-sanctioned season and set her sights on a top-level 400.

Isaac Green - Green faces the mile field of a high school kid's dreams (or, if you prefer, nightmares) on Saturday. Green got a 4:05 and change at the Dream Mile in Boston earlier this month. He'll need something faster than that to be in the hunt this Saturday, but you can bet he will be aiming at the sub-4 along with most of the rest of the field. Nothing ventured, nothing gained. This is the time to venture.

Brie Oakley and Lauren Gregory - They're listed together here because they're running the same race (the two mile) and because it's difficult to see them any other way after nearly 12 laps of togetherness at the State 1600 and 3200. Both are legitimate threats to win. It may--or may not--be a long time before you get to see these two racing together again. Enjoy this one while it lasts. Oakley, of course, stunned the nation last year with a breakthrough effort to finish third in this race.

Tanner Norman - Norman has the distinction of having the slowest seed time in the Brooks PR two mile field. On the other hand, it could very well be that Norman has the most upside potential of anyone in the field, and it is definitely the case that the rest of the field hasn't dealt with racing longer distances at altitude. For Norman, it's been almost entirely a season of racing alone, including even when he made the trip to the Texas Relays to seek out more competition. On Saturday, Norman gets a golden opportunity to find out what racing with a very competitive field does for his performance.

Quinn McConnell and Madison Mooney - Mooney, of course, is fresh off a big win at the Festival of Miles. And that added validation to an earlier monster victory at Arcadia. Mooney has proven herself as a big-race kind of competitor. It doesn't get much bigger than Brooks PR. McConnell is the most recent Colorado athlete to get a Brooks PR bid. McConnell looked sharp the other evening at the Valor Twilight #1, but it's a big step from that meet to this one. Opportunity knocks for McConnell at the Brooks PR mile.

Note that Maria Mettler was also extended a Brooks PR invitation but decided to turn it down due to some lingering sickness following the state meet that had interrupted her training.