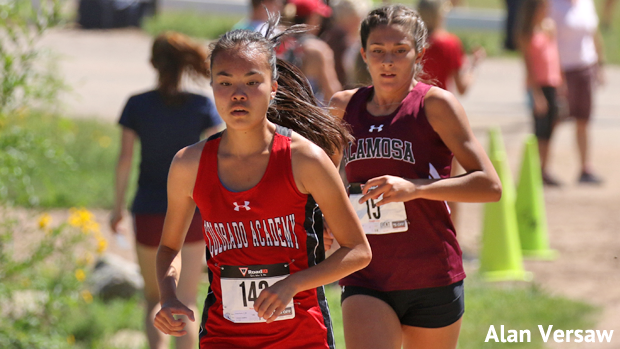 Anna Ponzio added to a growing list of meet titles this fall with another win at Denver West. File photo.

With a busy slate of meets to think about this weekend, it seems a wise idea to do a few quick wrap-ups on the meets that have already happened this week before they get swept under the rug.

We'll go most recent first. Judging by the fast times posted here, I'm going to hazard a guess that much of the course was on hard surface. Things likely would have been a little spongy, and therefore slow, otherwise. But, that's just a guess.

Cheyenne Mountain's Thomas Chaston and Walker Rudolph went 1-2 on the boys side. They've done that before this season. In fact, it appears to be getting a bit habit forming for the duo. Ryne Johnson gave the Indians three under 17 minutes, and that more or less put and end to the time title race.

Valor Christian, sans Cole Sprout (and maybe a couple more), was 33 points back in second. Denver South, running without Yonatan Kefle, ended up in third.

Kipp Denver Collegiate's Ahmed Sado continued his run of nice finishes with a fifth-place time of 16:50. We'll probably see more of Sado in the state meet.

Anna Ponzio and Lexi Emerson had a nice battle for the title on the girls side, with Ponzio eventually taking the win, 19:02 to 19:09. Ponzio's win proved to be important in the team battle as well, helping Colorado Academy to down a Fairview B team that came looking for some glory of their own.

It took a long time to fully settle the girls individual title between Pueblo West's Shyanna Holcomb and Florence's Kylie Simshauser. But, for the second time in four days, Holcomb eventually got the better of Simshauser. The pair were the only sub-20 finishers, and Pueblo West went on to an easy team title.

Pueblo West similarly dominated the boys team scoring, but the individual title would tilt in the direction of Vanguard's Nick Lovato in 16:57.

It is an interesting characteristic of meets hosted by 2A schools that they are going, almost universally, to a score-4 format in what appears to be a compromise with 2A's own score-3 format and the score-5 format of all other classifications. Evidently, it's tough to draw 3A and larger schools to a score-3 meet.

DeKoevend Park, which hosts a fair bit of cross country annually, hosted this meet. This one, however, will go down as one of the smaller meets hosted at deKoevend Park. While most of the teams were running at least partially offloaded rosters, SkyView Academy came loaded for Lion, Thunder, Pirate, Devil (Blue or otherwise), and anything else that came their way. Celebrating Tyler Scholl's first varsity outing in SVA colors, the Hawks dominated on every front.

Scholl and Jimmy Scavuzzo went 1-2, Ryan Butler and Jordon Wilson follwed in 4 and 5. All that was left was for Zach Zimmer to mop up in 10th. Nobody else knew what hit them.

Chatfield Reservoir was the place, and getting covered in mud was the game. Only Chatfield's Drew Johnson never slowed down enough to gather much mud. Johnson, in case you hadn't picked up yet on the trend, has been dominating every meet he shows up at lately. There are a few of us interested to see what happens when Johnson gets to line up alongside guys like Charlie Perry and Chris Theodore.

Cole Nash would end up in second, but Chatfield couldn't hold the early advantage over a hard-closing Highlands Ranch team. A 3-4 from Luke Schwab and Andrew Wisniewski got HR right back in the race, and the 3-4-5 finished the job, leaving HR with a 34-64 team score advantage over Chatfield.

Shae Henley dominated the girls race much as Drew Johnson did the boys. Kasey Klocek and Hannah McReavy went 2-3, but weren't really all that close to the speedy Grizzly. Following the patter of the first two individual places, ThunderRidge prevailed over Green Mountain in the team scoring, with Denver North well out in front the charge of the small schools in fourth.

For a muddy course (and I have it on good word that the track was muddy), this one ran very fast. Clearly, it wasn't muddy all over.

If this doesn't sound like a Colorado meet, it's not. This is the annual meet hosted by San Juan High School in Blanding, Utah. Typical of Utah, they run three miles.

I don't have results posted because this is the most difficult scoring program results to parse that I think I've ever encountered. I hope the program works well in the field, because it's absolutely miserable thereafter if you need to do anything with it.

I'll leave you with this...

The Colorado teams didn't necessarily load up full rosters. And where they did, the Utah teams came out on top, anyway. Trying to snare a couple of Colorado highlights for you to chew on, Phillip Hufman of Dolores was the top Colorado boys finisher in 17:16. Grace Manning of Mancos topped the Colorado girls in 20:50.

It was a long bus ride home for the Mancos, Dolores, and Montezuma-Cortez crews. I know, I've driven those roads. There is a cool spot to look for Acorn Woodpeckers along the way back, but it was probably dark when the buses went by.