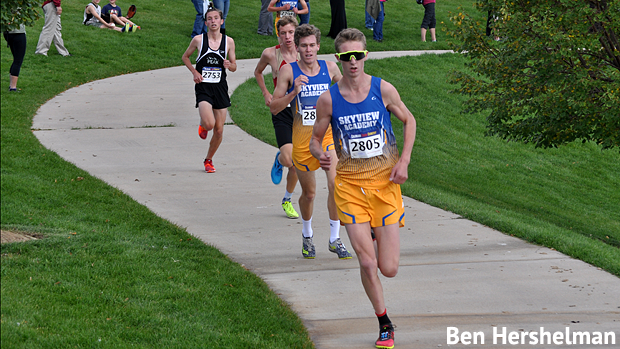 It's an amped-up SkyView Academy team with Tyler Scholl in the lead role.

The SkyView Academy boys put their new turbo-charged roster to the test today at Anthem Park in Broomfield. And, the test went well. SVA downed Faith Christian, 43 to 47, for the 3A Metro League title. Peak to Peak was solid, but out of the hunt for the title, in third.

The Hawks had four in the top eight, and that was just enough to get them by the Eagles. Newly-varsity-eligible Tyler Scholl led the way for the entire league at 16:25. Ryan Lehmuth and Campbell McDonough took the next two places, but SVA was back with Jimmy Scavuzzo in 4th, Ryan Butler in 6th, and Jordon Wilson in 8th.

Then, the Hawks had to hold their breath for a few anxious moments. FCA finished their scoring with Antonio Blaine in 16th at 17:35. Still no Hawk. Tristan Lee would eventually wrap up the SVA scoring in 24th at 18:23.

This is one league enormously impacted by transfers this year--Cole Sprout out and Tyler Scholl in. That probably leaves a lot of folks asking, "What if... " But there are no answers to that question. You can speculate to your heart's content--and even beyond that--but it is what it is.

The route to the 3A Metro girls title didn't take nearly as many twists and turns.

It's been a while since Quinn McConnell, Anna Shults, and Tiana Bradfield suited up, but today they were just as effective as the last time they suited up. McConnell took the win in 18:07, Shults was second in 18:31, and Bradfield third in 19:22. Allison Beasley and Elle Triem had the scoring shut down by ninth place. Jenna Howard finished 10th, just to be sure.

Not much gets away from these Pumas. Not in the individual column and not in the team column.

Colorado Academy, with a nice 4-5 from Anna Ponzio and Lauren Fossel, finished a distant second.

Going forward, league powers Peak to Peak, Faith Christian, and Jefferson Academy join up with Holy Family, Denver North, and others in 3A Region 3. 3A Region 4 inherits SkyView Academy to mix it up with powers like Conifer, D'Evelyn, and Elizabeth. It looks like some rough sledding ahead in these regions.