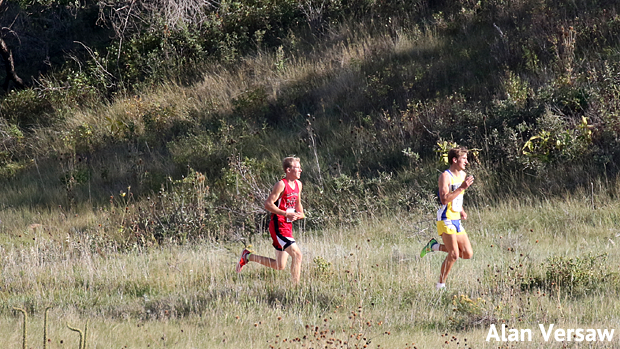 David Fine chases Connor McCabe up the second ascent. McCabe's lead wouldn't last much longer.
The Doherty Spartan has run several consecutive years now at Bear Creek Regional Park on the west side of Colorado Springs. And, being a county parks property, the meet has seen several changes due to the hand of the county parks in administration.

The meet now starts (and very nearly ends) in the parking lot of the community gardens. I can only imagine the ordeal of negotiation that involved. And, for all practical purposes, parking is now banned in the park east of 21st Street on the afternoon of the meet.

But, it does all seem to work. At least it did on Thursday. And, I will readily concede the parking situation is easier than it was the last time I was able to attend the meet.

But, all that aside, there was some nice racing going on and a lot to be learned from Thursday's outcomes.