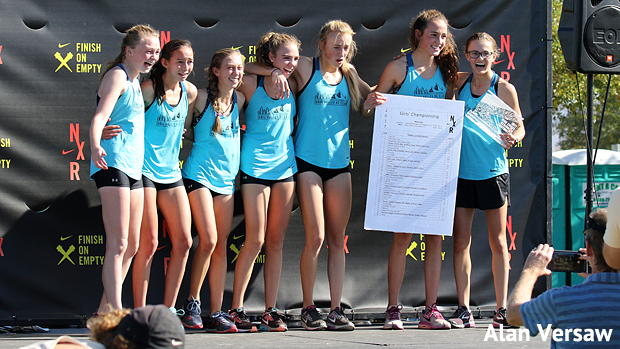 Battle Mountain's girls pulled off a stunner in Casa Grande. Can they revive the magic in Portland this weekend?

In 2005 and 2010, Colorado sent three teams to Nike Cross Nationals. Every other year, it has been two or fewer, with two years of no teams at NXN.

So, 2017 becomes the new high-water mark for Colorado with four teams, plus an additional four individuals, making the trip for a grand total of 32 competitors in this year's field.

Individually, a top-20 finish is outstanding; a top-10 finish is sensational. Several Colorado athletes are within range of top-20 finishes this year. Almost certainly, a few will get there. But, the string of two consecutive girls individual titles appears to be in definite jeopardy. Cole Sprout, only a sophomore, looks like Colorado's top threat this year to pull down a top-10 finish.

In the 13 previous years of NXN, Colorado has cobbled together a total of 31 top-20 and 17 top-10 individual finishes. If you do a little math and figure there are 20 available top-10 finishes and 40 available top-20 finishes each year, Colorado has vastly outperformed its proportion of the overall pool of athletes in that regard with a clip of 1.31 top-10 finishers per year and 2.39 top-20 finishers per year.

Colorado's best-ever boys finish of third by Noah Shannon in 2005 seems likely to remain Colorado's top-ever boys finish after this year as well. As a note on that finish, however, there were no individual qualifiers to NXN in 2005. Since the beginning of the era of individual qualifiers in 2008, the top Colorado boys finishes have been Cerake Geberkidane with a fourth in 2013 and Eric Hamer with another fourth in 2014.

Unless you are the Fayetteville-Manlius girls, it's extremely difficult to project team order of finish with any degree of accuracy. There are simply so many very closely matched teams that have seen one another barely, if at all, during the course of the season. You can virtual meet this thing to death and still not have a very clear idea of much of anything.

Extrapolating from last year, however, the three Colorado girls teams should be able to match a 7-13 finish from last year and perhaps chisel out a higher finish even than 7th. Mountain Vista and Broomfield bring back the benefit of experience. Besides experience, it will benefit Mountain Vista immensely if they can put a completely healthy regular team on the course, something they haven't managed to do since before State.

Battle Mountain will have to hope that first-year enthusiasm and momentum pay some large dividends for them. The extensive strength training of the Battle Mountain program may also favor them on a course like Glendoveer.

Still, experience is a tough commodity to replace.

Mountain Vista's boys were part of the show two years ago, but the team is an almost entirely new (five of seven) set of faces from the team that went in 2015. The experience of Parker Mackay and Shayan Zarrin could be very useful for the other five if the two can successfully transfer what they know.

Mountain Vista dominated the Southwest region, a feat of no small standing. And, they are very definitely a team with a massive base of strength. The course seems well-suited to Vista Nation.

Mountain Vista's two-team representation is something that has happened only once before for Colorado. Fort Collins was the first, and only other, team to do that in 2010. 2010 was also something of a banner year for Fort Collins, with the boys finishing fourth and the girls sixth.

Colorado has enjoyed three years with two top-ten teams. Fort Collins and The Classical Academy did it first in 2009. Fort Collins did it on their own in 2010. Monarch and Fort Collins repeated the feat in 2013. Colorado has an excellent shot at adding to that legacy this year.

A History of Colorado at NXN