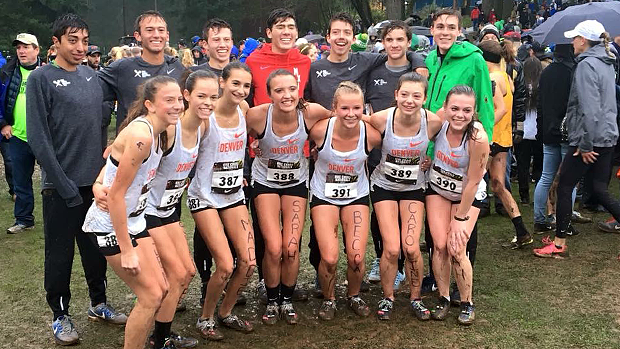 Mountain Vista had the best-ever Colorado combined program finish at NXN with a third and a sixth, edging the 2010 Fort Collins team by one combined place. Contributed photo.

Prior to yesterday, there had been three years when Colorado managed as many as two top-10 finishes at NXN. Yesterday, it was four. Needless to say, that sets a high water mark that could prove very difficult to replicate in years to come.

Not only did Colorado nail down four top-10 finishes, but two of those top-10 finishes were podium finishes. Both the Battle Mountain girls and the Mountain Vista boys claimed third-place finishes in the extremely competitive field.

The third place finishes do not eclipse the best team finish ever of second, posted by Smoky Hill in 2004. They do however, match the third posted by Fort Collins in 2009.

If it seemed all season long like Mountain Vista, Battle Mountain, and Broomfield were tough to get the better of, there's a reason why. And now we all know what that reason is.

And it was all done without the benefit of off-the-charts individuals. The top individual finisher from any of the Colorado teams represented this year at NXN was Shayan Zarrin, with a 24th in the boys race. On the girls side, it was Jenna Fitzsimmons with a 30th.

So, the lofty places were not earned largely on the back of a very competitive low stick; they were earned with solid performances one through five, and often beyond.

Individually, top Colorado honors went to Cole Sprout in 21st and Easton Allred in 22nd of the boys race. Charlie Perry earned a 30th and Anna Shults a 52nd to round out the Colorado individuals.