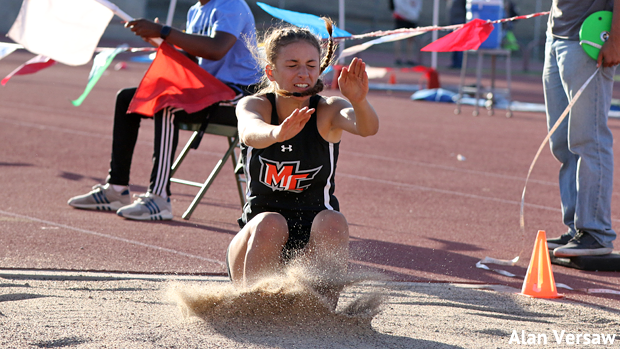 Morgan Short went to #5 on the 3A long jump list with a 16-10 winner early Friday evening.

The Pueblo Twilight's reputation for producing top distance marks is well established. But the front end of the meet, the part of the meet that falls before sunset, turned up its own stellar share of marks as well this time around.

Before we get to the large collection of high-end marks, though, a word or two about the demographics of the meet are in order.

And, whereas the Mullen Invitational draws broadly from the state's largest schools, the Pueblo Twilight draws mostly from local 4A programs and smaller schools across southern Colorado. This year, that meant teams all the way from Lamar to Montezuma Cortez.

All that, plus the distance carnival after dark, gives the Pueblo Twilight a feel different from any other meet in the state.

At this point, we'll step through the highlights of the meet by gender and classification. Click on next for a discussion about the small school boys.