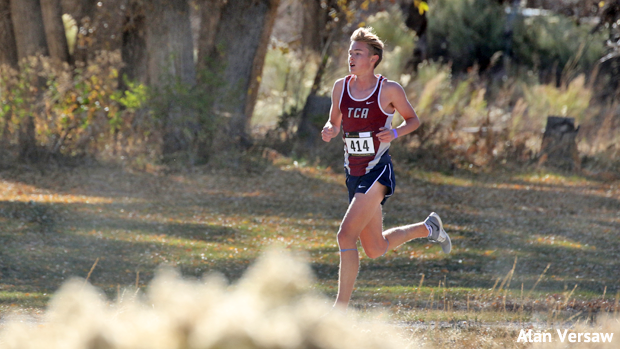 Mason Norman was a one-man pack at the front throughout almost the entirety of the race.

It had been since 2004 that Alamosa had hosted a regional meet. They never should have waited that long (but maybe it all had something to do with the sometimes irregular movement of asterisks in the bulletin). It ended up being a great place to settle the issue of who advances to state.

Under mostly clear skies--at least by the time the races began--the 3A Region 2 scores were settled on the grounds of the Cattails Golf Course along the north side of the Rio Grande.

Most of the cross country course follows golf cart paths, but where it traverses fairways, the grass was short and mostly dry. And, there entire course is impeccably flat, just as it always has been and always will be. Those elements contributed toward a fast track.

Contributing to a slower track were 7554 feet of altitude and the wind. Wind was more pronounced in the boys race than the girls but definitely putting in an appearance for both.

For a few years running, this region has been the launching ground for a lot of the top teams at state. In fact, this region has produced the last four 3A Boys state titles winners. Whether that happens again this year remains to be seen, but 3A Region 2 will once again send a very competitive set of teams to state.

You know the drill by now, click on Next for the girls story, then again for the boys story. If you need a diversion before you get there, I have links to results, photos, and videos below.