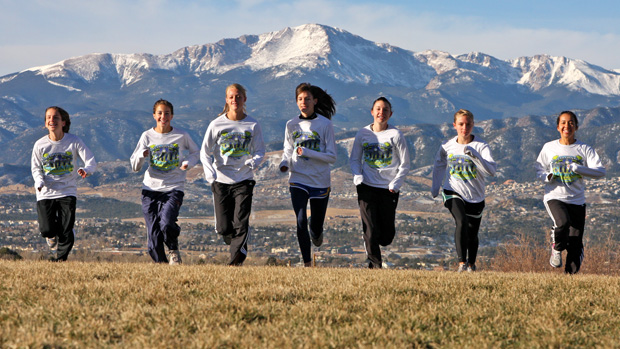 When you live under the shadow of Pikes Peak, it's easy to think it's all about elevation. It turns out that it's more complicated than that. Colorado Track XC file photo.

Note: The content of this article is a distillation of the content of a clinic session presented at the Colorado High School Coaches Association Multi-Sport Clinic on July 29/30, 2011.

About 10 AM on Saturday morning, October 2, 2010, Chris Suppes and I exchanged momentary glances of disbelief.

In a season that had thus far been very stingy in terms of yielding great times, Chris had just witnessed five of his Fort Collins High School girls run sub-19:20. Eight (of the nine permitted to run varsity that day) had broken the 20-minute barrier. I was almost equally impressed that five of our TCA girls had broken 20-flat. We hadn't come close to that all through September.

The Fountain Creek Regional Park course was not suspect. It is a course I have measured repeatedly and, if anything, it is 10 - 20 meters in excess of 5K. It was precisely the same course that had yielded times a little on the fast side of average for three years running, but nowhere near the fastest times of any course in the state. On this day, however, it ran like lightning.

Until the words started pouring out of our mouths, Chris and I were unaware that we shared a common suspicion--this phenomenon had to have something to do with the barometric pressure.

As time permitted, I worked on the barometric pressure hypothesis off and on over the next few months. Things got serious in track season when I purchased a handheld weather station and took it to every track meet we attended, measuring and recording wind, barometric pressure, and temperature for every 3200 contested. I even visited a couple of track meets we weren't competing in to gather the same data from those meets.

For years, we've accepted the notion that running distance is more difficult at higher elevation than lower. The air is lense dense at higher elevation and, so, the oxygen molecules needed to make the human machine run are in shorter quantity. In fact, from a human performance standpoint, all altitude is is differentiated density of oxygen molecules.

But altitude is far from the only thing that affects air pressure and density. It's merely the most obvious and the easiest to quantify of the factors that affect air pressure and density. And, since altitude is so easy to quantify, the NCAA eventually built a table of conversions for adjusting distance performances at each of the member schools' tracks located above 3000 feet elevation.

A sampling of those adjustments would include:

What the NCAA conversion tables fail to take into account, however, are the other factors that influence air pressure and density--things like temperature, humidity, and movement of weather systems.

If we disregard the temperature, humidity, and weather systems factors, we effectively proceed under the assumption that the abundance of oxygen molecules remains constant at Potts Field, at Rex Field, and at the Jack Christiansen track. To illustrate how misguided this assumption is, we need to introduce the ideas of density altitude and adjusted barometric pressure.

If you are a pilot, you are already familiar with the notion of density altitude. Since airplanes fly through the medium of air, it's important to know how dense the air is on any given day and for any given flight. Air density will affect the speed, performance, and climbing ability of the aircraft.

For simplicity's sake, humidity is often ignored in calculating density altitude as it's impact on air density is relatively small. And, incidentally, water vapor is lighter than air and, so, more humid air is less dense than less humid air (though not by much), contrary to popular belief. The most frequently used density altitude formula incorporates an altitude, an adjusted barometric pressure, and a temperature. That formula is still more complex than most people care to set eyes on and I have omitted it here.

With that background information in tow, let's go back to the example of Potts Field in Boulder (actual elevation 5260 feet above sea level) to illustrate how barometric pressure and temperature impact density altitude. Our calculations will ignore the small impact of relative humidity.

Further muddying the picture is the fact that a track at a lower actual altitude (say, for example, UNM's track in Albuquerque) might often (normally?) have a higher density altitude than Potts Field due to the warmer climate in Albuquerque. Warmer temperatures means more expanded air, thus providing less oxygen than cooler air at the same barometric pressure.The NCAA conversion tables do not take this fact into account.

At race time, the nearest weather reporting station was reporting a temperature of 55F and an adjusted barometric pressure of 30.26. The meet site elevation is 5600 feet above sea level. That all translates to a density altitude of 6281 feet. If anything, the actual density altitude was probably lower at the site of our meet as it is situated along Fountain Creek and colder (more dense) air tends to settle in drainages during the night only to gradually warm up again during daylight hours.

Especially when compared to the conditions we had been enduring all cross country season to date, the density altitude that morning was a gift. And most of the athletes responded with times they would not match all season long--at least not in Colorado. Course records for both genders were smashed.

That observation made, there are all sorts of questions rushing into the room, clamoring to be addressed. Let's take inventory of a few of those questions:

Q. Do differences in air pressure at lower elevations make any difference in distance performance?

The answer to this question is uncertain. Nobody, to my knowledge, has researched this question. It may well be that, up to a certain point, differences in air pressure and density are inconsequential to human performance. It may be, for example, that up to density altitudes of 3500 feet, there is more available oxygen than a distance runner can use. It's entirely plausible, as well, that this point varies by individuals. VO2 Max calculations suggest rather strongly that the ability to use available oxygen varies by athlete.

Q. Does the increase in air density that accompanies lower temperatures help to explain why we frequently observe very nice distance performances at temperatures that seem too cold to be optimal for human exercise?

I strongly suspect the answer to this question is yes. Typically, my distance runners have performed very well at temperatures down to about 40F (below that, the meets have usually been canceled or postponed, with one exception where we all nearly froze to death in an ice storm and times were terrible). There is no way those temperatures are optimal for muscle elasticity and such. Enhanced oxygen supply seems like a compelling explanation for the phenomenon.

Q. Is it possible to quantify the impact of changes in density altitude on distance performances?

As long as you understand that any such quantifications are approximations and not neat-and-tidy formulas, the answer is probably yes. It will take a lot more data than I've yet been able to gather to produce reasonably reliable approximations, however.

The rest of this article is a discussion of how I approached my research and what I have learned to date.

Earlier, I mentioned that I purchased a meteorological measuring device and took it to each meet we attended this spring. The device I purchased was a Brunton Summit ADC (Atmosheric Data Center). While probably not the world's most precise instrument, it is simultaneously lightweight and very portable.

I compiled names and race times for every 3200 performance at every meet this spring. Eventually, I discarded state meet times due to the fact that I was concerned that the added adrenaline of the state meet made those data points fundamentally different in kind from the data points from other meets during the season. I separated male times from female times to reduce scatter.

Further, I eliminated all times from males who never dropped below 11:00 for a 3200 and from females who never dropped below 13:00 for a 3200. My rationale for discarding these data was the suspicion that these athletes likely have factors larger than the amount of available oxygen limiting their performances. If oxygen availability is not the main factor limiting their performances, then I end up measuring something other than what I think I am measuring.

Even after these deletions, I still had hundreds of data points for both males and females. At this point, I performed multiple regression analysis on the data. I used week of the season, temperature, wind, and density altitude as the explanatory variables and race time (measured in seconds) as the response variable.

The results I got were astonishing, on multiple fronts, and left me with the settled conviction that I don't yet have nearly enough data points.

For boys, I got a predicted increase of about 14.4 seconds in total 3200 race time for each 1000 feet of increase in density altitude. This increase was statistically significant (meaning we would be unlikely to see a slope this far from zero simply by chance variation). It should be noted that the data were somewhat non-linear, meaning that increases in race time tend to grow larger rather than remain constant with continued increases in density altitude. It's also worth noting that the 14.4 seconds of increased time were offset somewhat by predicted time taken off due to the decreased temperature that typically accompanies increased altitude (whether we are speaking of actual altitude or density altitude).

For girls, I calculated a predicted increase of only about 5.6 seconds in race time for each 1000 feet of increase in density altitude. This increase was not statistically significant (meaning that chance variation alone could have easily produced a slope this far from zero). As was the case with the boys, however, these data showed a somewhat non-linear pattern of race times increasing more rapidly as density altitude continues to increase.

While I will be the first to admit that there is more work to be done and more comprehensive sets of data points required, the differences between boys and girls cry out for attention.

On the face of it, the differences above suggest differences in density altitude are felt more acutely by boys than by girls. And that is about as counter-intuitive as things get. We tend to want to think of differences in performance occasioned by increases in density altitude being delivered as a percentage of race time. If that were the case, the predicted increases would be larger for girls than for boys. Clearly, they were not in the data I collected.

At this point, the most plausible explanation I can conjure up is that more boys than girls are racing close to the edge in terms of using all of the available oxygen. Perhaps my 13-flat cut-off point for girls was not aggressive enough? Either way, we've certainly not eliminated the possibility that differences across gender might be due to physiological factors. And, it could still turn out that the observed differences disappear once we have more a more comprehensive set of data points drawn from a more diverse (and random) set of environmental conditions.

These are questions for further study.

Note: One of my cross country parents is currently working on an Android app to calculate density altitude on the spot. The design plan is that the app can either ping local weather station data for barometric pressure and temperature or those numbers could be entered manually. The app will either be inexpensive or free. I will make a note on this site when the app becomes available.