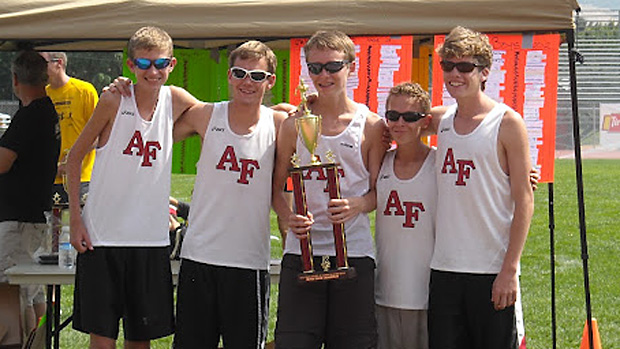 There weren't many meets in the Southwest region this week with NXR-SW implications, but what meets there were had huge implications.
This week's tour bus of the fabulous southwest need only make three stops, all in Utah. Going by chronological order means we stop first in Salt Lake City for the ...

It wasn't so much anything new that we learned here. It was more a matter of confirming some old suspicions. Ogden is good. Real good. And, don't let that big zero on their singlets deceive you. Think of it as their team score goal. Before the season is over, they just might get within 15 points of that goal. This is clearly an exceptional team.
The Ogden girls are likely still a bit ahead of the boys vis-a-vis the rest of the region, but both teams should be very competitive. Depth will definitely not be an issue for the Ogden girls, as a quick glance at the JV results will confirm.
Park City's girls, though decidedly behind Ogden at this meet, showed some fire as well. Park City didn't come down to Arizona last November, but this year's edition looks like a team that should make the trip.
Herriman's boys were another team of interest at this meet. If you look at the times, Herriman's results look pretty good. If you look at their relative placement, however, you have to feel like they came out just a little on the side of flat. I'm kind of suspicious about this course being a full three miles. If it was, all of Utah is better even than we thought they were. In any case, nobody is writing Herriman off yet, and it's entirely possible they were holding back a little, but at some point in the season they will have to score better than they did on Friday.

Southern Utah University in Cedar City is good enough to put on an early season meet for mostly southern Utah schools each year. Though Cedar City is close to St. George, it is much higher altitude than St. George and gives those schools a nearby opportunity to compete at an elevation even higher than what they will have to run at for the state meet in October.
As we suspected, the Pine View boys appear to be in something of a rebuilding mode this year. What we didn't necessarily expect was a huge out-of-the-gate performance from Desert Hills out of St. George. One meet does not a season make, but the Desert Hills boys have now established a place of priority in the early season pecking order for southern Utah. We will definitely keep an eye on Desert Hills as the weeks go by.
On the girls side, it wasn't as dominant, but Cedar put on a very nice show, highlighted by an individual title for Aimee Bryson. Cedar is a team that's been in the championship race at Nike Cross Regionals before, so there is no great surprise in them showing as the top team at this meet.

Herriman apparently didn't get enough racing in on Friday, so they showed up for this one on Saturday, too. And, you could make the case they did better over the hay bales on Saturday than they did over the grass and sidewalks of the park on Friday. Posting the 15th-best all-time mark at the AF Grass Relays isn't a bad showing. It's just that American Fork, Davis, Mountain View, Timpanogos, and Lone Peak were all a little faster on this day. What difference did running two races in two days make? That's hard to say.
What isn't hard to say is that American Fork got the best of Davis--and everyone else, for that matter. It was as if American Fork meant to send the message, "This isn't track season any longer."
And, so, it's not. Davis's mastery over all things in track season does not automatically carry over into cross country. It should be a very interesting fall.
Still, it's clear that American Fork and Davis were the class of this field, and I feel safe in saying that we're a long way from having heard the last of Davis.
Mountain View was solid in third, and, maybe more importantly, balanced. There were no splits that indicated trouble brewing at the #5 scoring position. Also of note, Alex Brown was back racing for the Bruins after missing last weekend.
Timpanogos got fourth largely by virtue of a monster final leg from Jake Heslington. And, while that says a great deal about Heslington, it also raises a few questions about how well they'll be able to score at the critical 4 and 5 positions this fall. That's a question that will have to wait several more weeks for a clear answer. There is still time for those positions to develop.
As far as the girls were concerned, this show belonged to Davis. And not just by a little. A quick scan of the sub-varsity results further indicates that Davis has plenty more where the top five in the relay came from. Mountain Crest and Orem also looked good, but the balance of the American Fork team means that the Cavewomen move ahead of Mountain Crest and Orem in traditional cross country scoring. And that's an important point to keep in view.
Utah has delivered a very impressive opening weekend. But, if you were paying attention to what was happening in the distance events in track this spring in the Beehive State, you aren't terribly surprised by what we saw this past weekend.
There appears to have been a small school meet in New Mexico, but the rest of the region was quiet. Things get underway in a big way this coming weekend, however. Labor Day Weekend will see most of the top teams across the region in action. We will be back with the usual week-in-review article next week (probably on or about Tuesday) and a new set of regional rankings (probably Wednesday or Thursday).
Tweets by ColoradoTrackXC