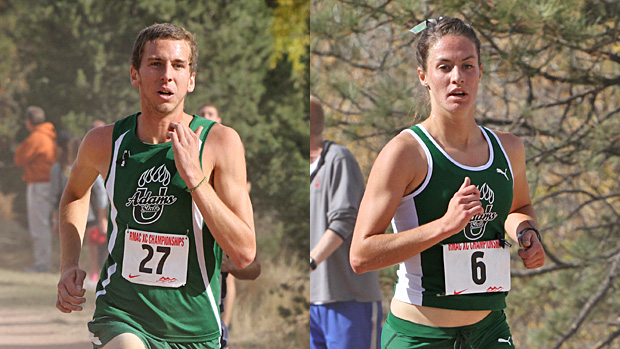 Adams State cross country has enjoyed better days that they had today, but it's probably a short list--and especially so for the competitors who donned the ASU green today at Monument Valley Park in Colorado Springs.

There was some drama early in the men's race as the front of the pack was sprinkled with roughly equal parts ASU green, Western State red, and Colorado Mines gray. But, on the final 2K circuit of the four-lap criterium style course, Adams State laid down the law of the league. And this year's law of the league is that Adams State rules.

It doesn't matter if you're talking about men or about women. Adams State rules.

No one had the script down better than Canon City High School graduate Tabor Stevens. Although Stevens had slipped slightly off the lead pace at 6K, he came storming back on the final loop to open a four-second gap on a pair of Orediggers, Phil Schneider and Sean Gildea, over the final kilometer. Stevens gave his clock a rest at 25:06, Schenider and Stevens at 25:10 and 25:14, respectively.

Still, at this point, it was advantage Orediggers, and the last most spectators had seen of the race, it looked to be a close contest between Adams, Western, and Mines. What those spectators would see next, however, would change their perspective on things.

Kevin Batt of Adams snared fourth, followed by Ian Butler of Western. But Adams quickly slammed the door shut with Jovanny Godinez in sixth, Andrew Roberts (Lyons HS) in eighth, and David Sanchez in 11th. The Grizzlies had brought their scoring five across before either Western or Mines had crossed their fourth runner. That has a way of settling things quickly.

Results were similar on the women's side, less a significant presence for Mines at the front of the race.

Alicia Nelson (Moffat County HS) made her bid for the lead at an earlier stage of the race than Stevens, but was even more decisive about it once the move was made. Nelson broke free with about 2K to go and finished her race in 21:57, with 16 seconds of air between her and second.

Second also wore green in the person of Kelly Lamb (Creede HS). Western's Sophie McNeely broke up the wave of green in third, but the wave returned. In quick succession, Lauren Martin (Alamosa HS) and Alyssa Selve took fourth and fifth. Western's Tara Richardson and CCU's Regan Mullen added some color to the leaderboard collection of singlets, but Tracee Van der Wyk closed out the ASU scoring in ninth with a 22:57.

Western State would end up an easy second and UCCS a fairly distant third in the team tally.