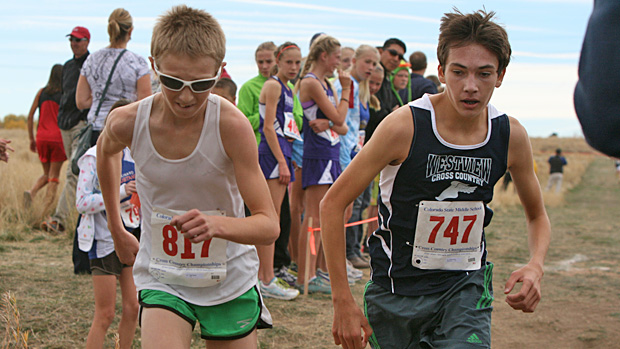 Tyler Scholl and Andrew King went at it hammer-and-tongs for most of the race before King finally moved ahead to stay. Photos by Karl Fortney. 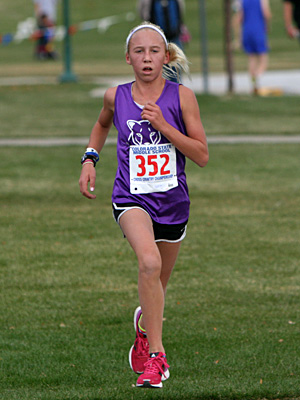 Although our races have ranged from 1.5k to 5k all season long, the distance we’ve trained for, and the one that counted today, was 3.5K. Finally, the convergence of competition we have been waiting for, and we were not disappointed. And, there’s nothing like a cool fall morning to stage a showdown.
In the young ladies race, Julia Vitella (unattached) took the early lead as the pack, including Lauren Gregory (Preston MS, pictured left) and Quinn McConnell (Peak to Peak MS) moved cautiously behind.  By mile one, however, Lauren had taken over the lead and was opening a gap on Julia and Quinn. This would be the finishing order with Lauren (runner-up last year) looking strong all the way with a 13:05. Her win today moved her up one place from her finish last year. Julia followed with 13:18 and Quinn 13:28.  TCA’s Chantae Steele came on strong to place 4th with 13:34, and Devon Kroeker (Unattached) ran 13:43, rounding out the top five.
As for the team standings, Salida’s first finisher, Bari Beasley was 13th, but they packed the rest of their team in just right.  Taryn Ceglowski 16th, Harper Powell 33rd, and Susan Wadsworth 38th, would provide for a winning team score of 62, nipping Bill Reed Middle School by 3 points.
The Denver Center for International Studies had 73 points to fill out the top three trophy winners. Don’t try to add up the finishing places and get the team score, however. Unattached runners and the 7th, 8th, 9th finishers for each team were removed for the team scoring.
In the boys race, Andrew King (Westview MS, Longmont) and Tyler Scholl (unattached, yes, his sister Tabor should be running next weekend) were the front runners from the get go. About 1.5 miles in, at the water crossing (which was dry this year), they were neck and neck. Andrew made a surge in the last 400 meters to win the title with a time of 11:54. Tyler followed at 12:02. TCA’s Tanner Norman, Isaiah DeLeCerda (Ortega MS, Alamosa) and Landon Rast (Cimarron MS) rounded out the top five individuals.
Behind these five, the team battle was on. Westview placed finishers 6th (Jamie Lee), 11th (Brock Dykema) and 16th (Sean Kilcullen) for a team score of 29. That is a statement at a state meet. Team Ortega came in 2nd with 62 points, narrowly ahead of Walt Clark with 64 points. Every single place does make a difference.
So the top teams, boys and girls, are spread over the state from Salida (1st Girls) & Alamosa (2nd Boys), up to Loveland (2nd Girls & 3rd Boys)/Longmont (1st Boys), with Denver in the middle (3rd Girls).
And we have some new champions to reign for a year until we do it all over again.
Meet Results, Photo Albums
Tweets by ColoradoTrackXC