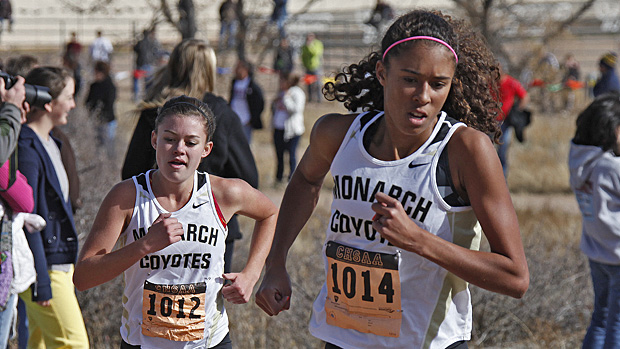 Claire Green and Kaitlyn Benner bring a Colorado state title with them to Arizona, along with hopes of tackling a course more suited to their natural speed. Photo by Jeff McCoy.

What looked to be a pretty clear picture a month ago has clouded over some with the events of the last month.

The most notable clouding effect has been a series of state meet performances that failed to live up to typically high-end expectations for a large portion of the region's top-tier teams. Although Xavier, Davis, Monarch, and Eldorado each took home some very nice trophies (and add Fort Collins, Ogden, and Pine Creek to this list, even though none of these teams claimed first-place trophies), each of their state races seemed a little on the side of flat.

Was it the something to do with the state course in one or two cases? Was it the pressure? Was it the accumulated wear and tear generated by the high-octane performances of their seasons? Was it some mixture of the above?

In all probability, yes, yes, yes, and yes. And, we may have missed a factor or two in our little session of speculation.

But, while these teams were less than 100% sharp for their state races, the same can't be said for Park City, American Fork, Mountain Crest, and Los Alamos. These four teams are coming out of their respective state meets riding enormous cresting waves of confidence. Whether that is enough to push them to an NXN-qualifying position at this weekend's meet remains to be seen.

As was the case with the Utah boys, it was also a spectacular season for the Utah girls. Davis, until struggling a little at state, was untouchable.

A great team, however, wins even when they're not completely on top of their game. And Davis still won at the Utah state meet, beating a very solid, and surging, American Fork team in the process. Mountain Crest and Park City were simply brilliant in winning the 4A and 3A titles, respectively. Ogden's state season limped in to the finish a little, but if the Tigers are healthy and rejuventated for NXR-SW, they're a team capable of creating a host of problems for the rest of the field.

Moving to Arizona, Xavier College Prep has dominated everything inside the borders of the state for several years running. They looked very sharp at Desert Twilight, but the razor's edge has been a little rougher since that time. There is, however, ample time to reset in the two weeks between state and NXR-SW, and this is definitely one team nobody wants to be caught underestimating. For several years, Xavier struggled with nailing down the right formula for performing at NXR-SW, but last year's effort indicated that the riddle has now been solved. And, sleeping in their own beds the night before surely doesn't hurt their chances.

Los Alamos and Eldorado figure as the two best teams out of New Mexico, but it's worth noting that Albuquerque Academy beat Eldorado in a merged score from the New Mexico state meet. It is old news inside New Mexico, but people outside of the state may not know yet that Adam Kedge now has charge of the girls team at Albuquerque Academy as well as the boys. His first year in that position should be deemed an unqualified success. Make a note of that somewhere for future reference--AA's girls may not be quite ready to run with the elites of the region this year, but that status doesn't figure to be long in coming.

Los Alamos is a serious pack team. They have no certified front runner, but they stick together like velcro. At least in New Mexico-sized meets they've made an enormous success of that strategy. At Desert Twilight, however, the plan wasn't nearly as successful. Actually, they stuck together pretty well; they were just too far back in the pack to be effective. So, they have to know they can't repeat that scenario at NXR-SW. I think they're a better team than they showed at Desert Twilight, but those jury members who are still holding out on the verdict can be forgiven for their hesitation.

Eldorado needs to come to NXR-SW with more fire than they showed at state. It could very well be this team was pointing at this weekend rather than last weekend. Back-to-back big meets can push you into those kind of decisions. We'll see what comes of it all on Saturday.

Colorado brings down three certified contenders, and a possible fourth. The certifieds are just who they've been all season: Monarch, Fort Collins, and Pine Creek. Frankly, all three of these teams are better suited for a Toka Sticks kind of course than the Colorado state meet course. Each of these teams are more gazelles than grinders, but the Colorado state meet compelled a transition into grinding mode. They went 1-2-3 at the state meet, but it wasn't the prettiest of performances for any of these teams.

Fort Collins and Monarch have been through the NXR-SW wringer before. They understand quite well what's at stake. They know what they need to do to advance. And, it's common knowledge among the NXR-SW regulars that you must figure on Fort Collins having their best effort of the season at this meet.

The NXR-SW experience is much closer to unbroken sod for Pine Creek. As such, they come in as more of a wild card than either Monarch or Fort Collins.

The possible fourth out of Colorado is The Classical Academy. After a modest start to their season, TCA finished well, claiming the 4A state title, but had too big of a 4-5 gap at state. If that problem is fixed at NXR-SW, this team could be seen as a dark horse.

All things considered, this has the look of being easily the deepest girls team field ever assembled at NXR-SW. Not only will there be no easy advancements to NXN, there doesn't even appear to be any hope of an easy top 10 finish. This region has become a monster among the Nike girls regions.

At-large possibilities for the Southwest region seem uncertain. Xavier helped the cause by taking down Great Oak (CA) at Desert Twilight, but gave back some of that ground by way of falling behind Great Oak in a merged team score at Mt. SAC (Xavier ran in the individual sweeps race whereas Great Oak ran in the team sweeps). The Utah schools rocked Bob Firman, so that much should bode well for the region's chances in the scramble for an at-large bid.

But the hard data runs out there. The size of the SW region makes participation in a lot of cross-regional meets difficult, at best.

If the big four of Xavier, Fort Collins, Monarch, and Davis go 1-2-3 in some fashion and the finish order remains close, chances seem pretty good for an at-large bid this year. It was fairly apparent last year that the region had a very good case for an at-large bid, but was overlooked in favor of a team that did not finish well at NXN. Some of those memories have to linger over a little in the minds of the selection panel.

What happens if a team other than Xavier, Monarch, Davis, or Fort Collins occupies the #3 position makes for an interesting discussion. Certainly these four are the teams of greatest reputation in the region. The discussion gets even more interesting if a team outside of the circle of four slips into one or both of the top two positions. Given the rough road through state that many of these teams traveled, that seems within the realm of possibility.