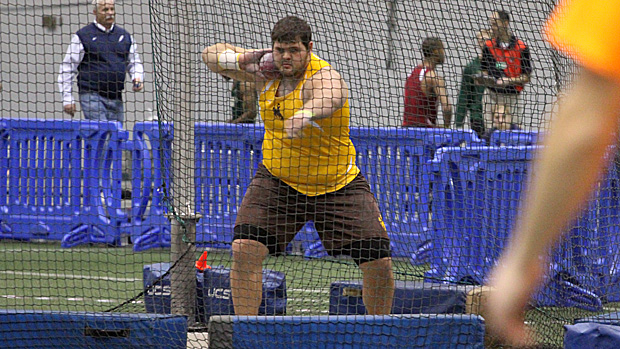 For a lot of Colorado track and field fans, it was just like old times watching Mason Finley today. Photo by Alan Versaw.

It was the field events' turn to bask in the glow of the spotlight at today's concluding session of the Air Force Invitational. And nobody took better advantage of that opportunity than Western State's Barbara Szabo and Wyoming's Mason Finley.

Szabo set a personal best mark of 6-2.25 in the high jump to make her imprint on the day. Szabo made three more attempts at 6-3.5 before bowing out of one of the best days any high jumper has ever enjoyed in Colorado. Already the NCAA Division II leader in the high jump, Szabo extended her lead over the field by three-quarters of an inch with today's effort.

In the shot put ring, it was a very familiar figure in an unfamiliar singlet who dominated the competition. Four years ago, Mason Finley was dominating the Colorado high school scene. On this day, he dominated the shot put with a toss of 65-9, good enough to move him two places up on the NCAA Division I indoor shot put ladder. As of early this afternoon, Finley trails on Arizona State's Jordan Clarke in the indoor shot put rankings. Finley's big throw came on his final throw of prelims, but at least a couple more of his throws were within a few inches of the 65-9 notched on the third throw.

While Szabo and Finley provided the biggest fireworks, there were several more notable performances on the day, and several Colorado high school alumni represented on the list.

For fans of the triple jump, it was no surprise to see Air Force's Kassie Gurnell win the event at 40-4.25, but folks around Berthoud will remember well the name of Cheyenne Hall. Hall has continued her parade of leaps and bounds at nearby Colorado State and finished second in today's triple jump at 38-11.5. 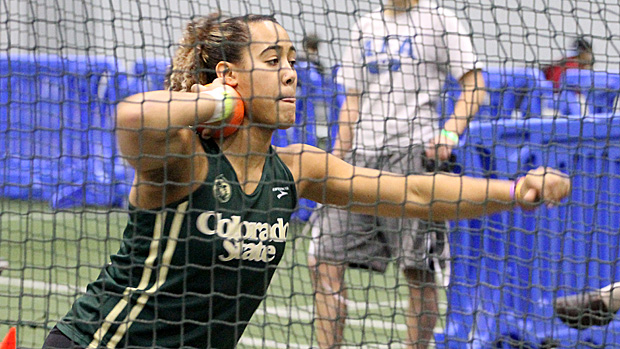 Colorado State's Kiah Hicks (pictured above) won the shot put with a heave of 50-4.5. Hicks made her mark in the high school ranks just a few miles away at Falcon High School. Those with a bit longer memory of Colorado high school track and field will recall that third-place finisher Liz Johnson, also of Colorado State, was a highly-regarded Fossil Ridge HS thrower in her own right.

BYU's Rachel Fisher edged teammate and Rampart High School alum Kelli Ehardt in the the pole vault. Both cleared 13-1.5, but Fisher took the title on misses.

Ponderosa grad Breanna Hemming (and that surname should ring familiar after this year's cross country season) staged a furious last-lap charge in the women's mile to overtake Colorado's Staci Foster at the finish line. Hemming's winning time of 5:06.34 beat Foster by .02 of a second.

Eileen Gehring of Colorado beat teammate Lyndsi Mattson 55.00 to 56.50 in the 400. Local track watchers, however, may have been more intrigued by the third place finisher. The navy-blue clad runner from BYU had a very familiar ring to her name--Kaylee Packham. Packham's third-place time was 57.56 and followed two heats of 60 hurdles earlier in the day. Gehring also doubled back to win the 200 over Northern Colorado's Amoni Ashby and Rachel Hinker, both of whom enjoyed stellar high school careers in Colorado.

The leader board in the men's triple jump was littered with familiar names. Graham Gilliland (Rocky Mountain HS) took the win at 48-10.75, but was closely followed by Jonathan Edmunds (Littleton) and Trey Richardson (George Washington) at 47-9.25 and 47-0.25, respectively. All three jump for Colorado State Unversity these days.