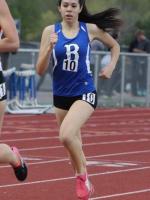 Rain and Slop Fail to Deter 5A Region 4...
Megan Mooney not only earned a second-place finish, but also helped her Horizon team to qualify for state despite being down a key runner. Colorado Track XC file photo by Jeff McCoy....

Front Range Girls Preview: Nothing Easy Here...
If you remember this scene from late in last year's state race, you already know a lot about the Killer Bs of the Front Range League. Photo by Alan Versaw....

Favorite Images: April 10 and 11...
A tight finish for second at the John Tate Challenge Cup. Photo by Tim Hilt....