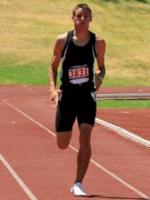 Erasures in the Record Books...
Alexa Chacon had the distinction of breaking the 3A 100 hurdles mark twice on Saturday morning. Photo by Alan Versaw....

Liberty Bell Recap...
For those who had forgotten what she can do in a pair of spikes, Kaela Edwards offered a refresher course this last weekend. Photo by Ashley Green....

Big-Time Results at at Big-Time Facility...
Marcus Harris was the fastest sprinter in Colorado on Saturday, winning the 100 and 200 at the Titan Track Clash. Photo by Mike D&#39;Amato....

One Fine Week in March...
Lutheran&#39;s Kendall Horan was one of several 2A girls who enjoyed a large measure of success this weekend. Photo by Paul Jaeger....

T & F Outlook 2012: Boys Sprints...
Alex Mead, fresh off a 200-meter title at the Simplot Games, will give 3A sprint coaches a lot to think about this spring. Colorado Track XC file photo....

Colorado Enjoys Stellar Simplot Day of Finals...
Kirk Webb takes thrid place on the podium for the 800 meters. The winner of the event, Tyler Smith of Canada, ran 1:49.46. Contributed photo....