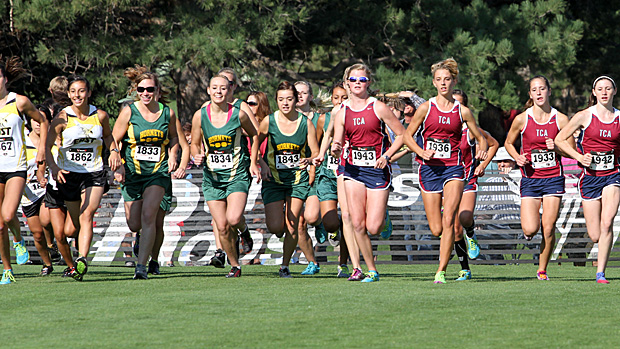 There is no course in Colorado that rivals the spaciousness and pleasant feeling of the starting line of the Pueblo Central Invitational. Colorado Track XC file photo.

In a state of any reasonable size, you're bound to have several very good cross country meets. Colorado is no exception, unless we're an exception on account of having such an abundance of these kind of meets. My attempt here is to name the ften most significant meets in the state of Colorado. Significance arrives in a lot of different packages, but chiefly comes down to character (a difficult thing to quantify in any objective sort of way), size, competitiveness, and atmosphere generated.

For the purposes of this article, I'm only interested in invitationals. And, I am purposely avoiding discussion of the TCA Titan Thunder Invitational in this article. The article is not about promoting my school's own meet.

So, with those as the ground rules, here you have one person's take on the state's top ten meets:

That was easy, wasn't it? I've never been to Liberty Bell and never intend to go as a coach, but that is of no consequence where the significance of the meet is concerned. This is, by far, the one meet that people associate with Colorado high school cross country. Nobody, but nobody, comes here to train through. They come here, rather, to set PRs. If you have a bad race here, there is nothing to do but man up (please pardon the gender specificity of the expression) and deal with whatever fallout comes of it.

It's probably now the largest meet in the state of Colorado. If not, it's very close. And it feels like cross country.The open space behind the school helps to create that feel. Everything here runs like clockwork--it has to for at least 10 different races to start on 25-minute intervals. People come here expecting a meet run with absolute precision and care, and they get it. The course is fast, but not screaming fast, so it's not all about speed at the St. Vrain.

For now, this one is unquestionably one of the state's most signficant meets. Whether that changes if and when the state meet moves to another venue remains to be seen. This year, the meet managment has made what, to my thinking, is a very good decision to push the meet later into the evening. The Cheyenne Mountain course can get a little toasty in late August, so a few more teams will get the benefit of racing after the worst of the day's heat has come and gone. The meet has an exceptional number of races simply because the course capacity here is limited. If you've raced here in anything other than a 2A or 3A division, you know how important it is to keep the race sizes under control.

This one is the western slope proving grounds. People like to go fast, and this one provides an opportunity for everyone on the western slope to go fast against the best that the region has to offer. I'm not privy to the decision-making counsels of this meet, but it almost seems this meet could go to divisions, something almost unheard of for western slope cross country.

Were it not for the fact that about ten years ago someone in a position of power decreed that the pre-state meet would be held on opening weekend, this meet would rank much higher on the list than it currently does. The quality of this meet is underscored by the fact that it has not only survived, but even thrived, going head-to-head with the pre-state meet. You can't get much better in the way of a testimonial than that.

This one, of course, does have divisions. And it has legions of teams coming here to compete. Nobody I know of professes to be a huge fan of the course, but people still keep coming back to the course to race. This course and facility can handle the crowds and still provide a fair racing environment. In Colorado, there aren't many courses that can say that.

When you're the most storied cross country program in the state, it seems almost axiomatic that you have to have a big-time invitational. Fort Collins does. A good number of Wyoming teams come down for this one, adding to the intensity of the competition. But, half the teams from northern Colorado are already there, so it's hardly as if intensity is a scarce commodity needing to be added to at this one.

This is one of the oldest meets in the state, but there were a few recent years where I would not have included this meet on the list of top meets in the state. For a period of time, the meet organization slipped and the quality of the meet fell with it. Meet organization is coming back nicely, and this meet is regaining the feel it once had. And the course is still the most frequently used state meet course in history. So, when you race here, you touch many of the greatest moments in Colorado high school cross country.

Like Dave Sanders, I don't know many people who would tell you this is their favorite course. But the level of competition in this one is unmistakeable. With a lot of hard surface, this one tends to run fast despite the fact the the terrain rolls a little.

So, what do you think? Make your case for meets you think belong on the list in the comments below.