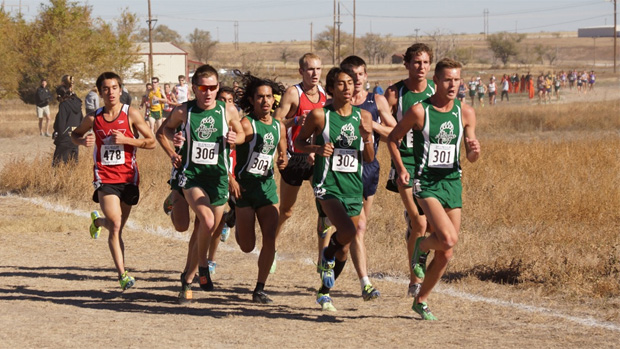 The regional qualifying meet isn't where you want to have your best meet of the season, but it's always nice to come away with a win even so. On the theory that if one is good, two is better, Adams State swept the regional titles, setting up the possibility of a bigger story for the Grizzlies two weeks from now in Spokane, Washington.

Western's Vegard Olstad took the men's individual title on the Canyon, Texas, course, but saw mostly green when he turned around to see what was taking place behind him. Jovanny Godinez, Kevin Batt, and Tabor Stevens crossed in 2-3-4, throwing the scoring advantage sharply back in Adams' favor.

But, this is a mercilessly tough region, and nobody is going to pack the top ten. Colorado Mines claimed the next two places, then two more for Western. Suddenly, you need a scorecard and a very quick pencil. And, you're cursing the fact that you didn't pop for that scoring program for your tablet.

Eventually, the dust did settle and Adams State took him the hardware by a 31-38 margin over Western. Anyone thinking that margin is safe for nationals two weeks from now is on a collision course with reality.

Adams State encountered far less resistance on the women's side of the region. The Grizzlies started things off with a 1-2-3 finish from Lauren Martin, Kelly Lamb, and Alyssa Selve. That set up a 28-point finish that left Western State in the dust with 62 points, even though Western had two top ten finishers in Tara Richardson and Anna Marshall.