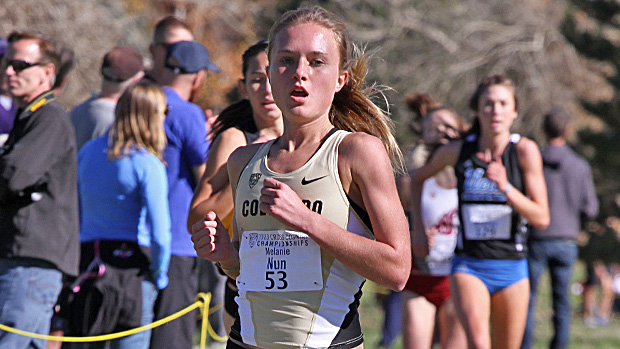 For Melanie Nun and the rapidly-rising Colorado women, there is yet some hope for a podium finish on Saturday. Photo by Alan Versaw.

For Colorado, as it is for much of the nation, this Saturday is the grandest day of cross country of the entire year. All four major four-year college national titles are at state on Saturday. NXR-SW takes place in Mesa, Arizona. And, for the mostly younger set, the USATF Region X qualifier goes off next to the border in El Paso, TX.

We'll start with the college ranks. Local teams Air Force (men), Colorado State (men), and Colorado (men and women) will be stepping to the line in Terre Haute, Indiana, at the DI national championships. But the local flavor will not be limited those three teams. Yes, those teams will be there and should include Colorado high school products like Connor Winter, Andrew Goodman, Christian Meyer, Ben Larson, Jefferson Abbey, Adam Hartman, Melanie Nun, Elizabeth Tremblay, and Jenny DeSouchet.

But there is a much longer list of Colorado high school graduates who we expect to be competing. That list would include: Walter Schafer (Notre Dame), Sydney Harris (Villanova), Cleo Whiting (Penn--individual qualifier), Joseph Manilafasha (Oklahoma State), Scott Fauble, David Perry, and Ryan Poland (Portland), plus Lindsey Nielson and Steve Flint (BYU).

There are, of course, possibilities that some teams move runners in and out of rosters between the region meets and nationals. That may or may not change the list above.

As we look to individual qualifiers from DII, we add Regan Mullen (Colorado Christian) to our list of Colorado high school alumni.

Colorado has no NAIA teams aside from Johnson & Wales, so finding the Colorado individuals among all the teams is a bit challenging. I don't hold out much hope that this list gets everyone, but we can expect to see Austin Germiller (Oklahoma Baptist), Chris Zirkle (Northwest Christian), Hunter Stayton (Kansas Wesleyan), Emily Williams (Westmont), Betzabeth Garcia and Bekah Hallman (Kansas Wesleyan), Madeline Boehlke, Riliegh Darby-McClure, Sylvia Hayes, and Chloe Boehlke (Oklahoma City), Samantha Barela (Johnson & Wales), and Lauren Shomaker (Hastings) on the starting line at Rim Rock Farm in Kansas.

There will be several individuals entered into the championship races as well, but those names have not yet cleared meet customs.