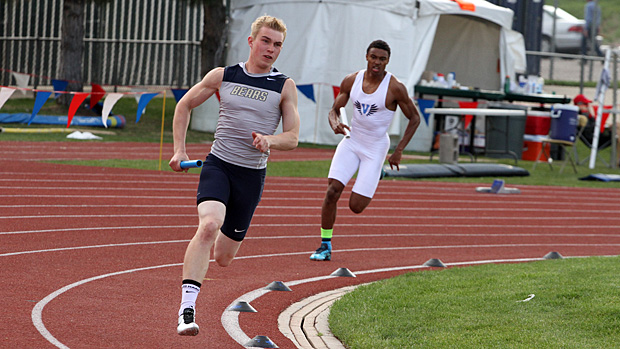 Frankly, it was difficult to miss seeing this one coming. And, when it came time for the show, Palmer Ridge barely missed a beat anywhere all weekend. This was one of the most thoroughgoing state meet routs any of us have ever witnessed.

The final team tally showed Palmer Ridge with 103 points and two very good teams in Valor Christian and Broomfield with 66 and 65 points, respectively.

Palmer Ridge has been a strong relay team all season, and none of that went away at the state meet. The 4x100 missed making finals and the 4x800 finished fifth, but the 4x200 and 4x400 both claimed meet titles. The domination of these two relays was illustrated by the 3:15.51 state meet record posted by the team of Marcus Garrison, Logan Malone, Thomas Busath, and Caleb Ojennes in the 4x400 finals. The meet title was long since decided at this point, but there were still matters of hunger and pride on the line--and Palmer Ridge comes up short in neither of those categories.

Aside from relays, it wasn't so much a matter of Palmer Ridge dominating events as it was a matter of a relentless presence in the event scoring. Palmer Ridge won no events other than relays, but tallied four points (Garrison) in the 100, seven points (Ojennes) in the 200, 11 points (Ojennes and Malone) in the 400, three points (Josh Bethany) in the 800, seven points (Bethany and Eric Hamer) in the 1600, seven points (Hamer) in the 3200, eight points (Evan Malin) in the 110s, 13 points (Busath and Malin) in the 300s, three points (Jordan Swango) in the high jump, and 15 points (Jacob Rother and Kyle Yoder) in the pole vault.

When you're planning your event meet strategy, you'd better have a deliciously good plan if that's the kind of mountain you're setting out to conquer. Simply stated, neither Valor nor Broomfield had the kind of event diversity necessary to mount a serious challenge. The team title mystery ended sometime early in the day on Saturday. Things were going so well that the Palmer Ridge coaching staff could barely stifle their own grins as the Saturday of the state meet developed.

That's not to say all the superlatives for the weekend belonged to Palmer Ridge--just more than their share.

Jackson Spalding was indomitable in the throws, winning at marks of 58-9 and 181-5. Both were well ahead of the rest of the field. Kevin McClanahan had no peers at any sprint distance. 10.67, 21.33w, and an amazing 46.78 (a 4A meet record) were the winning times. If McClanahan was tired after the 200, he was doing an excellent job of hiding it. Nick Meihaus doubled up on the bar events, going 6-10 in the high jump and 15-0 in the pole vault.

And, as a parting memo to the rest of 4A--we need a better plan next year.