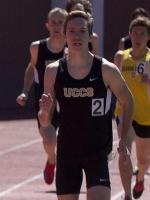 Sizing Up the Regions: 5A Region 5...
Jacob Blackburn leads a group around the final turn of the TCA Titan Thunder from last fall. This year, he could be leading the Rock Canyon team. Colorado Track XC file photo....

5A Boys 2013: A Crowd at the Top...
Dakota Ridge seems to be a team perpetually on the cusp on greatness. Can Carson Hume and company take it to the next level next year? Photo by Paul Jaeger....

Championship Season Previews: 5A Boys...
Clayson Shumway had the lead over Alec Brudzinski as they passed by the camera on Friday evening, but the ultimate victory went to Brudzinski. Photo by Ashley Green....

Chapped!...
It didn&#39;t end up as a perfect score for Chaparral, but Travis Anderson, James Kadolph, and Dominic Compoz did get a 1-2-3 out of the deal. Photo by Alan Versaw....