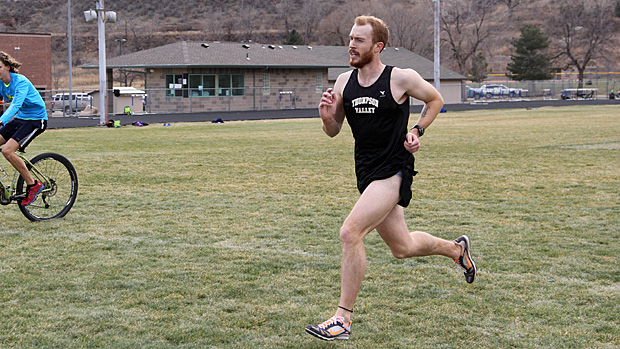 Thompson Valley assistant James Vance had no peers in either today's race or the history of the Fastest Coach in the State race. Photos by Tim Hilt.

The annual Fastest Coach on the State Race saw a large bump in numbers this year as 42 runners lined up outside of Lyons High School.

James Vance led the pack from the start crossing the first mile mark to the tune of 4:55. The Thompson Valley assistant was uncatchable, running a 15:53.

Vance is the second assistant from Thompson Valley to win the race, as Kelly Christensen also broke the metaphorical tape at this race in 2012 under the Thompson Valley banner before taking the reins at Palmer Ridge.

Thompson Valley head coach Matt Norton took a lion’s share of the credit for the success of his assistants. Norton explained with a glint in his eye, “I recruit coaches for this purpose. I have a black market system to get them over to TV, and then, you know, it’s just years of my own wisdom as an athlete, as a coach. I just impart that to my staff. We just come out here and take care of business.”

Vance stated that among his goals was to beat Kelly Christensen. He did not get the chance to take on the champion of the last three runnings of the meet head-to-head, but his performance becomes the fastest time run by a participant in the history of this race.

Robby Young of Rampart took second, and Alex Harris from Estes Park rolled into the finish in third. 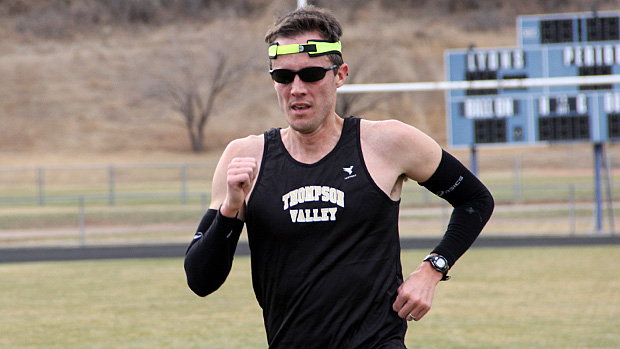 Fresh off his 40th birthday last week, Matt Norton (photo, above) made sure TV claimed both men’s division individual title placing 9th in 18:40. Alas, it was not enough to lead 4A to victory in the new-to-this-year team division of the race.

Anchored by a strong performance by Darren Brungardt in the 5th position, 5A went 2-4-7-8-16 with a 3:14 spread. The 37-point performance was good enough for first.

The 4A contingent, left limping from the absence of Kelly Christensen, held off a late charge from the Estes Park runners to beat team 3A by a single point, 46-47.

Christensen, who previously dominated this annual event, was rumored to have a comfortable seat recording stats at a Palmer Ridge wrestling meet.

Many coaches pondered the status of Christensen’s presence donning pieces of athletic tape with the inscription “Where’s Kelly?” Kevin Akers' piece of tape had a slightly different message, "Kelly who?"

Christensen’s absence, in addition to assuring 4A defeat in the inaugural team scoring, is surprising considering the challenge issued by the Palmer Ridge coach to Matt Norton and Broomfield’s Greg Weich following last year's race where neither Norton nor Weich appeared.

Norton used the comments to fuel his race today.

“That was a really dark day for me personally. I can say I spent the last 365 days getting myself ready. I had three goals for today. The first one was to look really good in my uniform. The second was to talk a lot of trash, and then thirdly beat anyone from the state of Missouri. I got all three, so it was a good day.”

Weich was again suspiciously missing from the start line. Rumors swirled that it was a potential knee injury that kept the nationally-renowned coach from the race, but it is worth noting that fellow 5A coaching legend Jonathan Dalby, who also suffered some recent knee troubles, managed to show up with donuts.

A record number of ladies participated in the race this year including CU alum Courtney Bouchet and the first ever victor of the women’s division Ruby Bode, both representing Estes Park.

Even with the robust field, TCA continued its monopoly of the women’s division with a 1-2 performance by Emily Hanenburg and Alison Toppen. 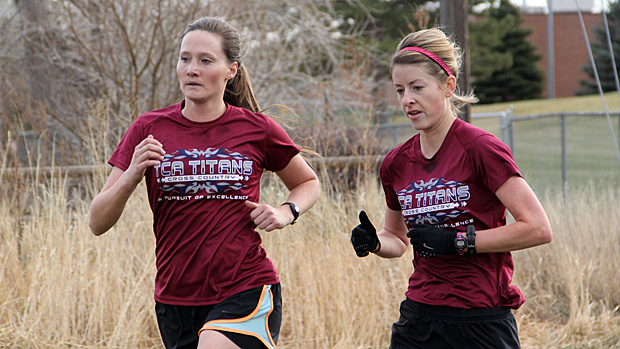 Hanenburg took home the title two years ago, and Toppen won the division last December. This year the two worked in tandem (photo, above) to finish just two seconds apart in 19:48 and 19:50. Hanenburg's 19:48, incidentally, represents a substantial improvement over the former course record for women.

Hanenburg credited Toppen’s presence as a training partner as the reason for the TCA tradition.

“I think that we went into this race, Allison and I, both just hoping that either of us could win it and keep that title in the TCA family. We’re really proud of our team and just so proud of our kids we just wanted to represent them well.”

Kim McConnell of Peak to Peak won the Masters division with an impressive 22:11.

“I got to yell at my coach the same way he yells at me. You know, ‘move up!’ ‘get five people in the next mile!’ I think he needs to get himself into a better position at the start. He needs to get out quick. I was also a little bit disappointed in his kick to the finish.”

Butler did give a massive amount of thanks to Coach Scherer for a great season.

Estes Park brought a pack of runners and some loud fans including Lily Tomasula-Martin.

The sophomore state champion’s cheering reached a crescendo when Estes Park math teacher and track assistant Barton Tofany challenged Geo Tam down the final stretch. Tam would edge Tofany by under a second.

Tomasula-Martin also made sure all the coaches gave it their best effort.

“One of my coaches was able to smile at me, so I don’t know that it was a good thing. Usually you want there to be so much hurt that it can’t happen.”

Bravo to Ben Hershelman and Mark Roberts for organizing such a fantastic event.