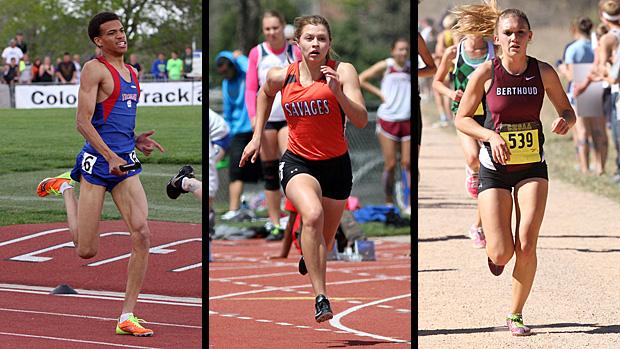 The University of Wyoming used the early signing period to ink a bundle of Colorado-based talent.

After several years of being without an early signing period for track and field, the NCAA had a one-week window of opportunity in the middle of November for schools and athletes to nail down some early commitments.

It's worth a closer look at how that all went. Clearly, some schools were using different strategies than others with respect to the the early signing period.

The University of Colorado used the opportunity to load up on some serious young distance talent. Dani Jones and John Dressel probably rank at the top of the list of national name recognition of CU's early signing class but, any way you look at it, it is a class calculated to keep the Buffaloes at the top of the pile. Colorado names in that signing group include Tabor Scholl, Karina and Elissa Mann, and Kaleigh Kroeker.

Since the University of Colorado is currently riding an almost unprecedented crest of success in cross country, it only makes sense that Mark Wetmore would get his pick of the high school class of 2015 and could bring them in on an early signing.

What might have been not quite as expected was the aggressive manner in which a couple other local schools signed recruits.

Most notably on the local scene, the University of Northern Colorado and the University of Wyoming made big efforts at getting substantial portions of their available track and field scholarship funds allocated quickly. In a sense, it was a calculated gamble--grab who they could early, but leaving less scholarship money to pursue athletes in April after all the early-signing dust had settled.

What does it mean? It means that UNC and Wyo will not have funds available to pursue some remaining unsigned athletes they might have pursued under the old signing protocol, but they were able to get several promising athletes, some they likely would have lost to other schools under the old system, into the fold before they got a lot of attention from other schools. Time will tell how that strategy worked out for them.

It will be more interesting still to see if UNC and Wyo repeat this same strategy next year. And, if so, will they find themselves garnering the lion's share of interest from the athletes who hope to make an early commitment, thereby cutting short what can be a lengthy and emotionally draining process?

The rest of Colorado's schools (we treat Wyoming as a Colorado school not because the Cowboys are in-state but because they are just across the border and, somewhat of necessity, have a long tradition of recruiting heavily out of Colorado) took a more cautious approach to the early signing period.

Yes, almost all made a signing or two or three, but each have left most of their funds in the arsenal for when signing reopens in April.

Realistically, the University of Colorado is the only school in this discussion with the program prestige (at least for the time being) to regularly compete for the highest-level recruits across the nation. As such, the University of Colorado had to enter the game in the early signing period. To do otherwise would be to forfeit much of their opportunity to sign the nation's highest level athletes.

The remaining schools should be now busily involved in evaluation of who is left on the table, inviting athletes in for visits, and, eventually, making offers to the list of uncommitteds.

Western State had the most early-signing-period activity among the Colorado schools outside of CU, UNC, and Wyo. If you follow things closely, however, this is not at all surprising. Western tends to run a very large track and field program by DII standards, presumably spreading the scholarship money relatively thinly across a larger corps of athletes. The affordability factor of Western State tends to play in their favor in this respect.