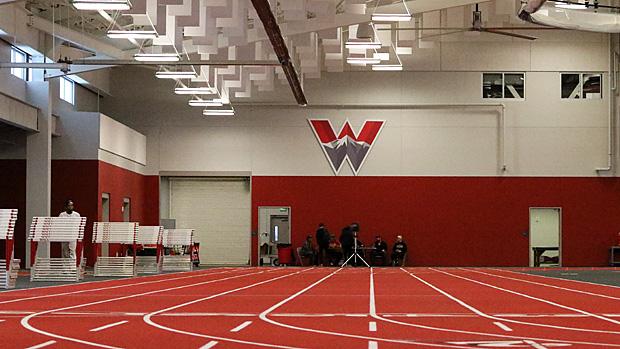 It would be disingenuous to suggest that I came to Gunnison without great expectations. I had heard folks raving about the new indoor facility at Western State Colorado University.

Having now seen it for myself, I can only say that the ravings scarcely do the place justice.

There is no better place in Colorado to watch indoor track and field, period. No place is even close. To be sure, the RMAC Conference meet at the end of this month is going to test the capacity of this place, but there actually is space on the east side of the field house for people to sit comfortably and watch all of the action. It's likely to be SRO when RMAC arrives, but far better SRO outside the track than inside.

Space is utilized inside the field house very well. The pole vault tucks into the northeast corner of the facility, just behind the main spectator entrance. The long and triple jumps, farthest from spectator view, take place along the west wall of the building, opposite spectator seating. High jump, athlete warm-ups, and throws take their places inside the six lane, 200-meter oval.

The track, though necessarily a little tighter on the turns than a 400-meter oval, has none of the feeling of an impending collision with a wall. The walls simply aren't that close.

Absolutely every event is visible from the seating area, and mostly comfortably so.

A weight room and an exercise room sit immediately off the track part of the field house, with large windows looking out over the track. 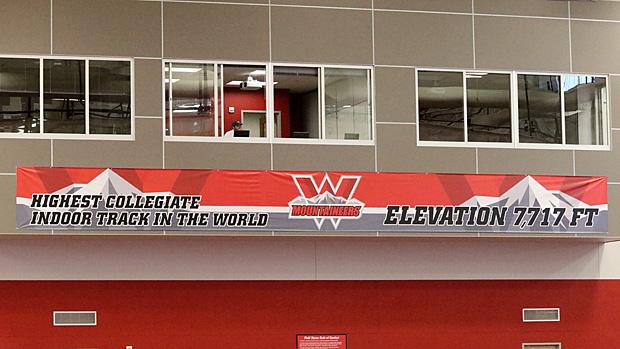 A banner beneath the press box at the south end, proudly announces the 7717 feet of elevation and the track's status as the highest elevation collegiate indoor track in the world... which, of course, begs the question of how many higher indoor tracks of any stripe and color there are in the world.

Indoor track and field never felt this good, and never felt so spacious, as this--at least not anywhere close to Colorado.

One problem the Western State staff seems aware of but is still moving toward a final solution is that a drinking fountain, the training room, and both athlete restrooms are all very close the the pole vault runway and across the runway from the track. This creates traffic--and hopefully only near misses--while the pole vault is active. Expect to see the runway regularly cordoned off in the near future.

That does, however, seem to be the only significant management problem created by the design of the facility, and it has a reasonably straight-forward remedy.

During daylight hours, light pours in through the large windows on the east (spectator) side, giving the venue a cheery sort of feeling mostly lost at Colorado's other indoor facilities.

From a photographer's perspective, the red walls tend to lend the same monochromatic background to too many shots. It can also mess a little with the color balance of your images. It's not distracting while you're there, but it is distracting as you begin viewing and editing photos. I'll have to figure a better way to add variety to backgrounds next time I'm there.

Light is in short supply near the long and triple jump pit, but no shorter supply than any other indoor facility in the state. It's inevitable that light will get a little dimmer next to a wall. Within a few hours of setting up shop there, I had made most of my necessary adjustments for shooting jumps.

Metering is occasionally thrown off by the many windows in building, but that's a fair and reasonable trade-off for all the extra available light that comes streaming in. Still, it helps when lights are turned up to full intensity in the building--especially so after sundown.