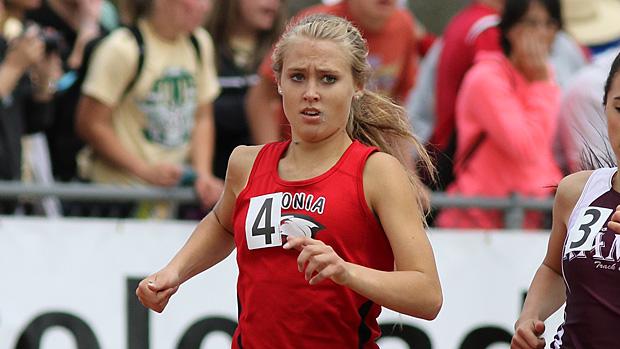 Brooke Hillman has helped extend Paonia's strength in the 800 and 1600 to a level earlier Paonia teams had not attained. Photos by Alan Versaw.

Actually, I don't know that they're running out of exclamation points in Paonia. But, they are going through them like they're going out of style.

After two successive years of beating up on cross-county rival Hotchkiss at state, Paonia made Lyons the object of their fury this year. The Western Slope schools are already pretty well versed in this particular drill. Lyons got their taste this weekend.

It goes a little like this: If it's not Marisa Edmondson beating you down in the sprints, it's Brianna Van Vleet and Brooke Hillman doing it at middle distance. If not Brianna Van Vleet and Brooke Hillman, it might be Morgan Hartigan in the shot put. If not Morgan Hartigan, then how about Ashley Van Vleet in the high jump? If not Ashley Van Vleet, then it might be Emily Pieper in the long jump. And so it goes. The only place you can count on a break is the pole vault.

And, don't even ask about relays. Paonia placed first or second in all five relays.

Outside of relays, Paonia's only individual titles were Morgan Hartigan in the shot put and Brianna Van Vleet in the long jump. It was the nickels and dimes that did everyone in. Nowhere was this more evident than in the shot put. Tucking in behind Hartigan's winning throw were Taylor Carsten in fifth and Emily Clawson in sixth. By the end of the day Saturday, Paonia had posted points in 16 of 19 events.

Even at Lyons, that kind of point production is hard to replicate. Jenna Anderson won the 800 and 1600, and Brenna Kuskie the pole vault, and the Lions posted the winning 4x800, but "only" 33.5 additional points. That won't keep pace with Paonia; just ask Fruita Monument or Grand Junction.

If it was rough on Lyons, though, it only got worse for the rest of the assembled teams. 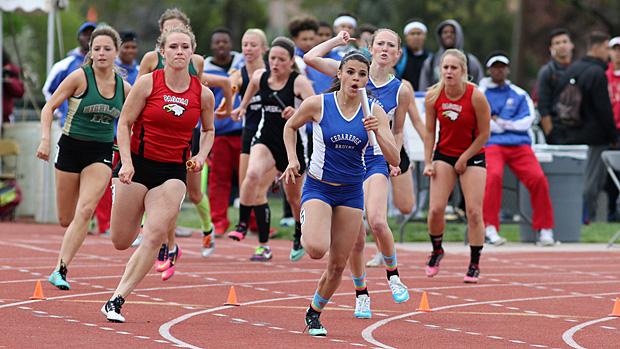 Cedaredge also set a 4x200 meet record in prelims, but couldn't hold on for the win in finals against Paonia. That would make two state meet relay records Cedaredge holds in two classifications! Kenzie Henderson added a high jump title and a long jump second to the Cedaredge cause.

In any other county, Cedaredge looks like a pretty good track team.

Kacey Buttrick took advantage of a relatively less intense Paonia presence in the hurdle events and claimed both of those titles, including a 45.48 in the 300s. Melanie Deering of Kiowa stunned the 400 field with her win, but Wiggins got a couple back with a win in the SMR8 and Courtney Jenson's 3200 title. Jenson, incidentally, stays busy in the fall with volleyball. I have my doubts if there's ever before been a volleyball player who won a state 3200 meter title. If you've seen Mario Garcia's hairline lately, you can tell he's done a fair bit of head scratching over that one.