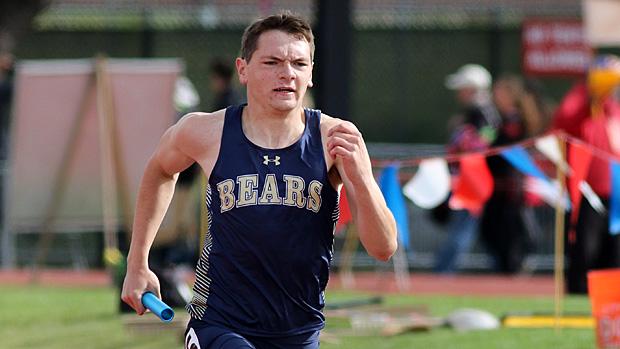 Caleb Ojennes won the 200 and 400, and helped Palmer Ridge to a 4x400 title at the end of the meet as well. Photos by Alan Versaw.

At Palmer Ridge, they don't believe much in the idea of protecting your weak spots. They might feel differently about that if they had a week spot to protect.

And those are just the guys who placed at state.

It's a hefty list of state title winners, but the Bears went down trying in another event as well. Against all odds, Eric Hamer tooks things out hard against William Mayhew in the 1600. Hard as in a 59-second first lap. Figuring his chances were slim to none if he let Mayhew sit on him and kick at the end, Hamer threw his energies at trying to burn Mayhew out early in the race. As it turned out, it didn't work (at least not in the sense of creating an upset), but it left a clear message that Palmer Ridge is a team unafraid of taking a few calculated risks. And, for all the risk laid on the table, Hamer still finished less than five seconds behind Mayhew's winning 4:15.63.

A team as good as Palmer Ridge that doesn't make any big mistakes isn't going to lose very often, and this one was never in danger of being a case in point to the contrary. Altogether, Palmer Ridge tallied 98 points to 52 for second-place The Classical Academy. The domination was nothing if not thorough. 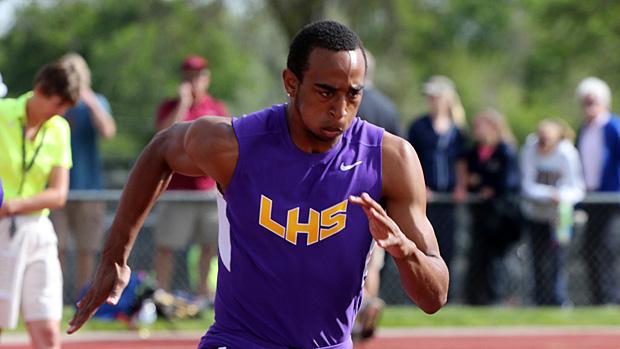 Aside from the Palmer Ridge story, things went mostly close to the script for the 4A boys state meet. Trenton Stringari left as a double champion in the hurdles (14.61, 37.71). Hayden Erickson and Austin Brant, meeting for the umpteenth time this season, split the throws titles between them. Mullen's James Jones outdueled Mountain View's Logan Stewart in the long jump at the high end of the 22s. Anthony Peters prevailed in the triple jump at 45-0.5. Noah McGhee (photo, above) took the one sprint title that Caleb Ojennes didn't take. And the two relays Palmer Ridge didn't win went to Longmont (4x100) and Valor Christian (4x200). Valor had a chance at a sweep of the short relays, but a missed exchange at #3 left the Eagles without a finish in the event. Longmont, however, may have won, anyway.

As a footnote on the outcome of the state race, Thompson Valley deserves a special mention for a team finish that put them at 50 points and third place. Though the Eagles went home without any event titles, they made their presence know again and again across a nice breadth of events. It might be unfair to suggest TV overachieved at the state meet, but they did manage to keep their bleeding of points to a tidy minimum.