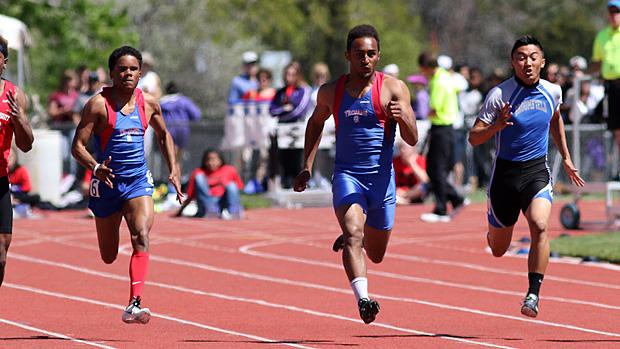 In a scene reminiscent of countless meets this spring, Tevin Donnell and Christian Lyon move to the front of the 100 meter pack. Photo by Alan Versaw.

When you lay your head down on your pillow tonight, try to figure out how it is that a team in the state's largest classification manages to more than double the score on the closest competition.

It starts with winning relays. And Fountain-Fort Carson won three of four relays. They won them, in fact by some ridiculous margins, the 4x100 by 0.9 seconds, the 4x200 and 1.64 seconds. The 4x400 retained its air of competitive mystery a bit longer than most as Smoky Hill's Blake Yount battled FFC's Duane McClurkin through the entirely of the final lap but could never get enough acceleration to attempt a pass.

No other team scored in all four relays, let alone scored 37 points between them.

Sprints, too, were dominated by FFC. Tevin Donnell and Christian Lyon went 1-2 in the 100. Tevin Donnell won the 200, and Duane McClurkin managed a second in the 400, unable to catch Gateway's Mike Ware at the finish. FFC's point total of 36 from the sprint events came within a whisker of matching their relay total.

Even with all the event titles, however, Tevin Donnell still struggled with name recognition. After FFC won the 4x400, an announcement came over the loud speaker that is was Donnell's fourth event title, except that his name was pronouned "Dorrell." Donnell simply looked up at the press box and grinned. That one, evidently, was easy enough to take in stride.

Blake Yount's heroics in the 800 have already been documented, but FFC managed a fourth by Dylan Day and a sixth by Benjamin Thomas in that event. Day added an eighth in the 1600.

FFC was shut out in the hurdles, pole vault, shot put, discus, and long jump, but picked up three points in the triple jump. Duane McClurkin settled for six points in the high jump at 6-6.

All of that was way more than anyone else even dreamed of managing. 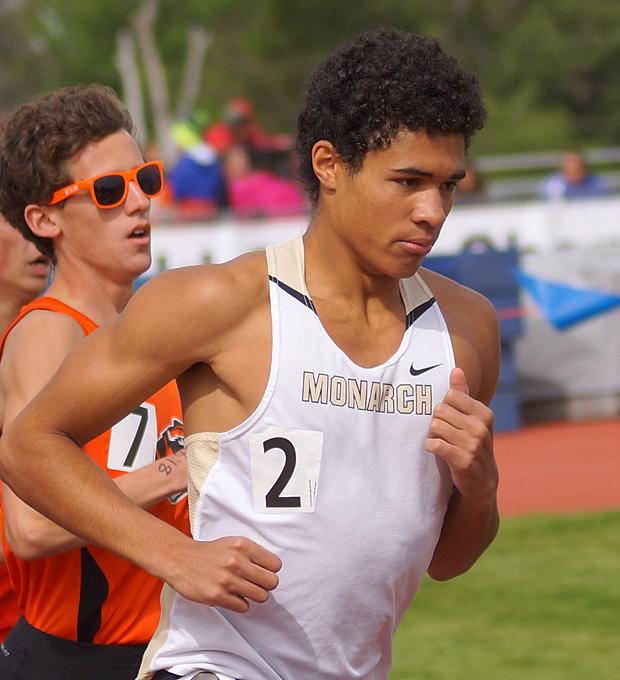 Distance titles spread themselves around nicely. In addition to Yount's 800, there was Isaac Green asserting himself nicely on the last lap of the 1600 and fending off a late challenge from Noah Riley (photo, above, by Ashley Green), and Marcelo Laguera absolutely refusing to let anyone else have a piece of the 3200.

Christopher Linnin kept his name in play deep into the competition in each of the jumps, but emerged with a triple jump of 46-9.5 as his only individual title. Trevor Rex, from across the district, won the high jump at 6-9, and Lakewood's Braden Smith won the long jump at 22-7.75. It was nothing on the high end of surprising that Overland's Joshua Wright won the 110 hurdles and Grandview's Triston Sisneros the 300 hurdles.