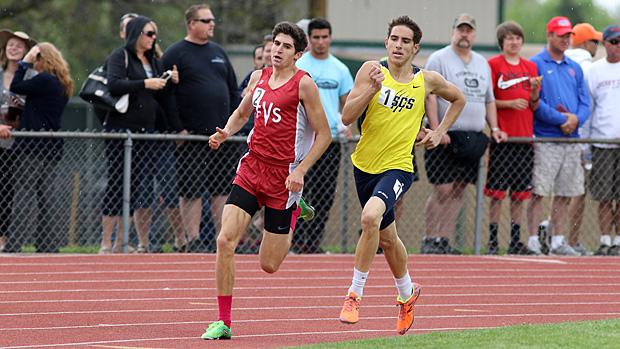 Though it didn't break any state meet records, the 3A race between Dominic Carrese and Jake Dunn offered the most stirring finish of the state 800s. Photo by Alan Versaw.

What was different about May 15?

This much I'm sure of: I don't have all the answers. But I think I have a few thoughts worth thinking aloud about May, or at least about one hour or so in the early afternoon.

Since I've become sort of famous for the oxygen density discussion, we'll start there. And, we'll start by saying I don't think oxygen density had much of anything to do with what happened on the Jeffco Stadium track from the first 1A 800 to the last 5A 800.

There are a couple of reasons for that, the chief one being, matters of oxygen density have to do with aerobic races, and the 800 simply isn't terribly aerobic--and especially not the way it was being raced on May 15.

Is there some small advantage to racing the 800 at lower altitude? Probably so. Races run at higher and lower altitude (by both collegiate and high school athletes) appear to suggest that. Let's say that conditions of really good oxygen density might make up to a second or so of difference. The data seem to support something like that (and the NCAA altitude conversion factor agrees), but not more than that.

All of that might be relevant in a small sort of way if we had conditions of great oxygen density of May 15. But, we didn't. In fact, barometric pressure was really rather low during the hour the 800s were being raced at state.

In fact, if anything, the barometric pressure was so low during that hour that it makes much more sense to hypothesize that the reduced amount of air the athletes had to push their way through was the advantage than to claim that better-than-average levels of oxygen for Colorado were available to the runners.

All that to say, I don't think oxygen density had anything at all to do with the outcomes.

Which is not the same as saying the weather had nothing to do with the outcomes. There probably is something to be said for reasonably warm (for May) conditions with fairly low winds and mostly obscured sunlight. The conditions that might drain an athlete who wasn't consciously taking care of him/herself before the race simply weren't there. Conditions that would impede an athlete's effort while on the track simply weren't there.

But, honestly, that's more the absence of a negative condition than something that would help an athlete run better. The weather was cooperating, but it wasn't providing an adrenaline rush all of its own.

So, what other conditions might have been in play?

The power of suggestion, perhaps?

The 1A 800s started the session. And, Ginger Hutton led off with a 2:12 800. Folks, there's no other way to look at that except that it's fast. Erick Enriquez-Acosta followed up with another 1A record-smashing effort of 1:57.

For the athletes waiting their turn in the warm-up area who may not have seen the races, there were announcements delivered with great enthusiasm over the stadium PA system.

2A Boys and Girls, 3A Boys and Girls, and 4A Girls didn't set any records, but there were some very nice times dropped, and gradually some awareness of what was going on had to be spreading through the crowd. Jenna Anderson ran 2:14-and-change. Jorden Jole stole one from the 2A Boys favorites in a very exciting finish. Dominic Carrese ran the fastest 3A 800 since Jason Zichterman in 2002. Katie Rainsberger flirted with the 4A record while the stadium announcer offered the play-by-play, but came up a just shy of the mark.

In short, when William Mayhew stepped to the track for his effort, there was already a bit of a buzz in the air. Though, knowing William Mayhew a little, I'm not sure how much he needed the buzz. For whatever help it might have been, though, it was there.

It may have been much the same for Jordyn Colter as for William Mayhew. It was clear that both went to the line aiming at records. It's not readily apparent how much the building atmosphere of the session helped fuel things, but it certainly didn't hurt. An atmosphere of expectation is not a distraction.

We do definitely know, however, that Blake Yount heard the announcement of his Colorado all-class record falling to the earth.

More important, though, than the atmosphere, and the single most important figure that I believe I can identify, is the manner in which the record-setting races went out.

As the 4A Girls race of 2014 illustrated so very well, nobody breaks 800-meter records when you go out cautious paces.

Both 1A races went out very aggressively. As much as Ginger Hutton was laying off in some of her other races, she stoked the fire for the 800. No 1A Boys 800 has ever gone out like this year's, and if Enriquez-Acosta expected to have things all to himself from wire to wire, he quickly had to revert to Plan B.

3A boys went out at a blistering pace. Jake Dunn looked like someone trying to break the field. He eventually broke all but one.

Katie Rainsberger wasn't having anything to do with a repeat of last year's 800 tactics and dared anyone to stay with her from the start.

William Mayhew had been getting better about going out alone and willing his way through the second lap all season long. Zack Retzlaff was at least close enough to possibly be heard behind Mayhew for the first lap.

Jordyn Colter went out like there was no tomorrow. Blake Yount may have picked up an extra squirt of adrenaline dealing with an unanticipated Benjamin Thomas in his crosshairs at about 160 meters, but he was already in beast mode at that point.

In short, the state 800s went out (with perhaps one or two exceptions we haven't talked about) like records were expected to be broken. And, with the 800, that's the way records get broken. Nobody brings down a record these days on the second lap without properly setting it up on the first lap. Nobody.

Were Enriquez-Acosta, Hutton, Rainsberger, Dunn, Carrese, Mayhew, Yount, and Colter the only beneficiaries of their race strategies? Well, no, but they were the primary beneficiaries. The counts of exceptional times this year versus previous years depends a little on what you define as exceptional times, but certainly the counts of sub-2 800s and sub-2:15 800s from state this year don't exceed any precedents.

Those who tried to stay close, who kept themselves in the wake without torching themselves in the process, might fairly be labelled as beneficiaries of the champion's strategies. These people probably did log better times than they would have in other state meets with different sets of circumstances.

For these people, the biggest benefit may have been that they didn't end up sitting patiently on the shoulder of the presumed most dangerous runner (and be sure that each of the record-breaking races had a presumed most dangerous runner). Thus they would have spared themselves the indignity of becoming the sacrificial lamb when the favorite decided to take over but lost a precious second or two or three waiting for the ultimate winner's strategy to play out. Instead, they had the benefit of being able to take things out at their own best pace. In this fashion, these individuals could "draft" off the decisive early strategies of the individuals with record-breaking on their minds rather than defaulting to tucking in behind the stratagems of the presumed most dangerous runner in the field.

What seems most different about this year is the count of athletes who toed the starting line of their 800s with the thought of a record coursing through their mind. That, certainly, set the stage for what followed, but it's also true that the complex of events while the 800s were being contested did nothing to hinder those efforts.

On another day, and without the cooperating complex of conditions, the records likely would not have fallen like rain.

Nobody ran faster on May 15 than they were capable of running. If you stop and think about it, that whole idea is just nonsense. Nobody ever runs faster than they are capable of running, no matter what the race. But, it is true that the complex of the day's events surrounding the 800s allowed several people to run a lot closer to the full extent of their capability than we might even normally expect to see at most state meets.

And, there is a happy little footnote to add to this story. For all those who've wondered what it would be like if Blake Yount and William Mayhew ever actually got to race each other instead of running in separate races, you get to stop wondering on June 20.

We have to allow for a few more parties in the mix, but we should get an answer to that question when Yount and Mayhew toe the line for the Brooks PR 800 in Seattle. Oh, yes, and Jordyn Colter will be running in the girls 800 at that event, too.

Perhaps then we will see a brief reprise of the storm of records.