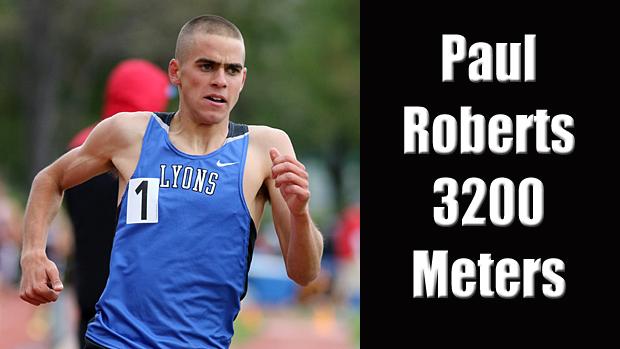 Paul Roberts figures to be taking aim at the state 3200 meter record this spring. Photo by Alan Versaw.

Today and in day's following, we'll take a look at the Colorado high school all-classification records in greatest danger this season. It promises to be an exciting spring with a few very talented athletes taking their shots at the best marks this state has ever produced.

We begin with Paul Roberts of Lyons High School and the boys 3200 meters.

The current record was established by Brent Vaughn of Smoky Hill High School in 2003 with a time of 9:05.89.

And, there's some background to this record that most people don't know about.

The background begins no later than the state cross country meet of 2002, though you could argue it began during their junior year. For about 4900 of the 5000 meters, Vaughn and Air Academy's Ian Burrell battled hammer and tongs, neither giving so much as an inch to the other. Around the Kent Denver course they rolled, far ahead of everyone else and seemingly headed to a photo finish.

Only the photo finish never occurred. Vaughn's body gave up just short of the finish line and Burrell went on to win in 15:19.8. Fourteen seconds later, Vaughn stumbled across the finish line and spent a long while in the trainer's tent afterwords putting the pieces back together again.

That was the way of the rivalry between the two during their senior year. At the state track meet, Burrell had already edged Vaughn for the state title at 1600 meters.

For Vaughn, it was down to one last chance to redeem himself against the Air Academy star who seemed to have his number.

Conditions were not favorable for the 3200. Temperatures had climbed to around 80F, but this would be one case where an athlete would will himself through the circumstances. Vaughn's improbable 9:05.89 under difficult circumstances (and it was a negative split race) beat Burrell by 22 seconds and the rest of the field by 35 seconds and up.

So, with Vaughn's big run in 2003, the 3200 all-classification record fell for the third time in four years. The cavalcade of record-breaking events ended just as abruptly as it had began, though.

Since then, several have come close, but none have succeeded. The list of close-but-no-cigars includes:

Of the five above, Paul Roberts is the only one whose "qualifying" mark was not earned during his senior season, though Kevin Williams did post a 9:10.97 at the Great Southwest Classic just after his junior CHSAA season. Ordinarily, of course, an out-of-state mark would not qualify for consideration, but this one is worth mentioning in that the UNM track sits at a little over 5000 feet of elevation.

So, you see, it's pretty difficult to not start thinking about the possibility of Roberts taking a whack at Vaughn's record this spring.

Whether Roberts takes a shot at the record at the state meet remains to be seen. The 2A 3200 is slated for first thing on Friday morning. Conditions then are likely to be as ideal as the state meet will ever afford, but much may depend on where Lyons sees themselves setting up in the team race. If they feel they can afford to have Roberts spend whatever it takes to chase the record, then such an effort seems likely. Otherwise, not. Lyons has a long a decisive history of putting team ahead of individual when the state meet rolls around.

It seems almost a given that Roberts will make a couple attempts at the record during the invitational season as well. The first realistic set-up opportunity seems to be the Longmont Invitational on March 26. The meet will have an elite 3200 race that should provide the kind of competitive stage such an effort seems to require.

The next most likely opportunity on the schedule would seem to be the Stutler Bowl Twilight on April 22, where Roberts ran his 9:13 last spring.

The St. Vrain Invitational, coming just a week prior to the state meet, does not seem like a likely stage to make a record-breaking effort.

As an aside, if Paul Roberts breaks the 3200 record, he will become the only 1A or 2A athlete on the all-classification list.