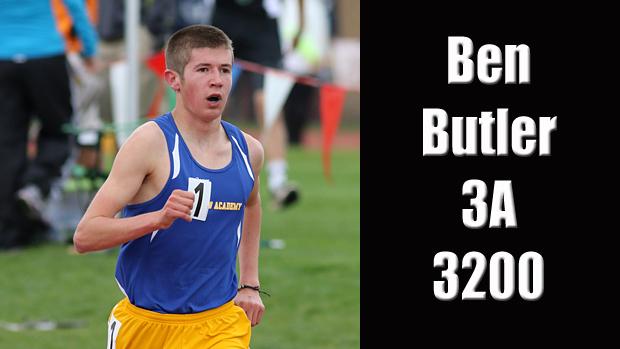 Ben Butler takes aim at one of the older records on the 3A books this spring. Photo by Alan Versaw.

For those of us who saw Bret Schoolmeester run, it's still a little difficult to imagine that one of his records might be under siege. Schoolmeester dominated in a way few ever have.

But, then, so does Ben Butler. Butler, who just finished ninth in the Pan American Junior Men's 8K cross country race in Venezuela (8K at 27:19.36--fourth on the USA team), has had the singular misfortune--at least from an exposure perspective--of having his entire high school career overlap with that of Paul Roberts.

But, make no mistake, Butler has left his mark on 3A. Since SkyView Academy moved to 3A in the fall of 2014, Butler has lost only to Dominic Carrese in 3A competition at any distance of 1600 meters or longer. Last year, Butler's best 3200 time checked in at 9:23.19. Butler ran that mark at Liberty Bell.

If we dig back in the annals of Colorado high school track and field, we see that Bret Schoolmeester ran his 3A record time of 9:18.38 at the 2001 state meet in Pueblo.

It doesn't take too much imagination to picture Butler running five seconds faster at some point this year than his best effort from last year. Butler doesn't have an established tradition of running a lot of 3200s in any given season, but it's a fair bet that SkyView Academy will let him line up and take a shot or two at the record at some point.

Invitational meets on the schedule which could easily figure for a record attempt include the Longmont Invitational, the Mullen Runners Roost, Liberty Bell, and the Colorado Meet of Champions. From an altitude perspective, the CMOC is the least attractive option, but there is more to oxygen density than elevation.

What does take imagination is squaring the running style of Bret Schoolmeester with that of Ben Butler. The exchange of records, if it does happen, will go from the long, flowing stride of Schoolmeester, to the short, compact stride of Butler. Evidently, it is the motor inside that counts.