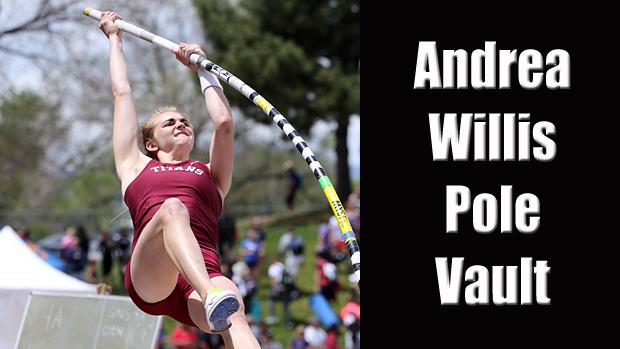 Andrea Willis already owns the 3A Girls pole vault record, but much more could be in view this spring. Photo by Alan Versaw.

Longmont's Elizabeth Stover owns the Colorado pole vault record at 13-4. And, it's been a while. That record went over the bar at a regional meet (Remember those?) in 2008. Kelli Ehardt went 13-1 the same year, but nobody has been close enough to threat since.

Until now, that is.

The first big hint we got was at last September's State Fair Street Vault. There, Andrea Willis went triumphantly over 12-11.5 and had a couple of tantalizingly close brushes with 13-5.

After that, pole vault went into hibernation for a while, but picked up where it left off during indoor season. Willis has had four different clearances during indoor season at or better than Stover's 13-4. The best effort of the season was turned in at the Air Force High School Indoor Open, where Willis vaulted 13-7.25.

That mark, incidentally, was the top girls pole vault mark in the nation of the indoor season, though it is still possible that New Balance Nationals Indoor could write a different ending to that story.

For Willis, however, it is outdoor season now, and that means wind and slower runways to deal with, but as we noted with the 2A Boys pole vault record watch article, vaulters always seem to go higher in the outdoor season despite all of that.

In any case, it's highly likely--though not a done deal yet--that Stover is spending her last moments in the company of her record.

And, it's not even as if Willis is the lone threat...

Taylor Alexander of Vail Christian has powered her way over 12-8 during the indoor season, with NBNI still to go. Going from 12-8 to anything better than 13-4 during the outdoor season seems far from an impossible kind of progression. In any case, the 2A Girls state meet record of 11-1 looks like very easy pickings as of this moment. Assuming Alexander eclipses that mark, that would give her both the 1A and 2A state meet marks, as Vail Christian has moved to 2A after Alexander's sophomore year.

Alexander missed most of last season with a shoulder injury, or it is likely the 2A state meet record would already be hers.

Behind Alexander is another Willis, Erika. Erika Willis cleared 11-11.75 during indoor season and seems primed to go higher this spring. Erika may, however, need to wait until Andrea is graduated and out of the way before she starts thinking too seriously about records.

All indicators point toward a spectacular pole vault season ahead.