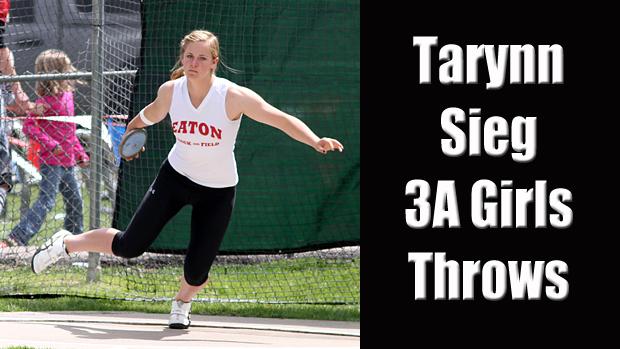 Tarynn Sieg figures to be taking aim at the 3A Girls throws marks this spring. Photo by Alan Versaw.

After a year of relative rest, it's a worthwhile conjecture that both marks could be legitimately in the sights of Eaton's Tarynn Sieg.

Last year, Sieg had best marks of 44-9 in the shot put and 132-8 in the discus. Both marks are close enough to the 3A records to mark this year's junior as a legitimate threat to write some new, and larger, numbers on the board. And, Sieg pitched a shot 42-0.5 in her lone indoor appearance this winter. Thus far, the shot put has been the more consistent of the two events for Sieg, likely making her a bit more likely to tackle that record this year than the discus.

And, should she not break either or both this year, she has another year remaining to take another crack at it.

If you've seen Sieg throw, you already know she's a good deal more athletic in the ring than most high school throwers you're going to see. She's also tall, and that certainly doesn't hurt in either event.

Eaton's recent history in the throwing events tells you all you need to know about the quality of coaching in this program.

Keep a sharp eye out this spring for Sieg's marks. The records have been duly warned of the present danger to their very survival.