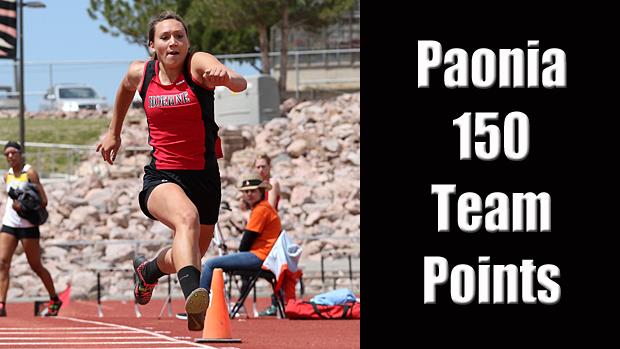 Sophia Anderson gets to keep her colors, but she wears a new uniform this spring. Photo by Alan Versaw.

Six months ago, I doubt I would have gone out on a limb and entertained the possibility of Paonia posting 150 points at this spring's state track meet. But, word of Sophia Anderson making the move over the mountains changes a thing or two.

A lot of things still have to go well--very well, in fact--but it appears Paonia has a legitimate hope of hitting 150 points this spring. A deep and talented roster will do that for you in 2A.

I can't say with absolute certainty that no team has ever reached 150 points at state, but I am fairly certain it has never happened. I've pored over a lot of state meet results these last few years, and I can promise you a number like 150 would stand out. But, I haven't found a number to match that description yet.

So, for now and waiting for demonstration otherwise, I will put 150 team points at state out there as a mark that would set a team scoring record.

By what route, then, would Paonia have a solid shot at getting there? I'll break it down for you. Not that Coach Brian Mitchem may end up putting the pieces together different than I would, but the point for now is just to show that it's possible.

Brianna Van Vleet - very possible long jump winner, could run 200 or 400 for points as well, and likely comes in on a couple of relays

Marisa Edmondson - appears likely for mid to high points in 100 and 200, plus adds two relays

Brooke Hillman - comes in for high points in the 800 and 1600. That's a load all by itself, but figure she's good for at least one more, and possibly two more, relays

Sophia Anderson - contends for the triple jump title. Possibly adds another individual event, but looks like a reliable leg for two relays.

Deon Jensen - Doesn't run cross country in the fall, but a very serviceable distance runner nevertheless. Makes it to state in at least one distance event, possibly two, and possibly contributes points to the cause. Likely shows up as a 4x800 leg.

Emily Pieper - high points in the long jump and gets work on a couple of relays.

Taylor Carsten - mid to high points in both throws

Mandy Van Vleet - yes, another Van Vleet coming in as a freshman. Mandy already looks like a competitive high jumper. Doubtless she will make other contributions as well.

What should be standing out to you is Paonia's luxury of enough legs both to run all of the relays and took keep rotating in fresh legs. Last year, Paonia scored 44 out of a possible 50 points in the five girls relays. It's not at all unthinkable they exceed that total this year.