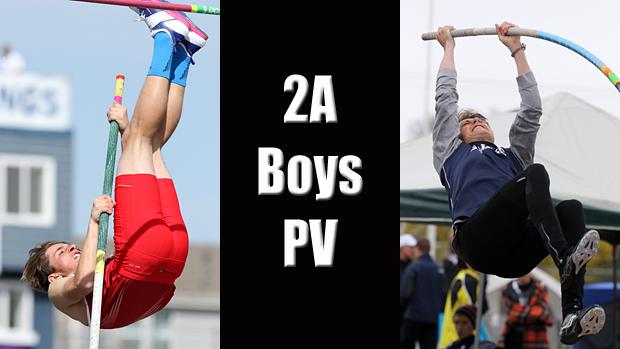 Brandon Hinkle and Cooper Daniels rank at the top of their class in the 2A pole vault. By the end of the season, they could be the top two all-time. Photos by Alan Versaw.

If the record watch articles seem a little fixated on 2A to date, please be patient with me. There will be some non-2A record watches coming soon!

If you were in the business of selling life insurance and the 2A Boys Pole Vault record came waltzing into your office, it would be an uncomfortable conversation that followed.

The assault on the 2A Boys pole vault record began in earnest during the indoor season. By the end of the indoor season, Cooper Daniels owned a 15-1 best mark and Brandon Hinkle a 14-7.5 best mark. The current record stands at 14-9.

To be sure, there probably aren't any outdoor runways as fast as the Air Force Academy pole vault runway. And, there's almost always that little issue of wind to be dealt with in outdoor pole vaulting.

Still, the established fact is that Colorado's indoor pole vaulters almost invariably go higher during the CHSAA-sanctioned season than they did in the indoor season. Given that, the current record is an extremely poor life insurance risk.

And, unlike an event like the 3200 where you actually try to set up a run at the record, every meet is an opportunity to break a pole vault record. There's nothing you're likely to burn one Saturday that won't be available again the next Saturday.

Long story short, Daniels and Hinkle get an entire season of taking shots at the 2A all-time best mark. The state meet mark, however, comes down to a single opportunity on Friday morning, May 20.

It would be cool, and fitting, if Daniels and Hinkle get to square off at a meet before May 20, but I don't know the schedules well enough to say whether that will happen or not. Both Daniels and Hinkle affiliate with Above the Bar, but both get a good deal of hometown coaching as well.