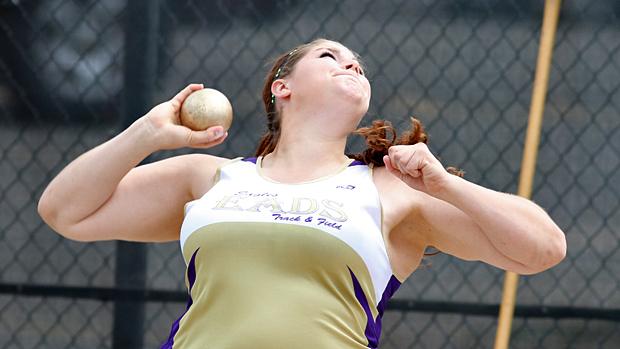 Eads' Brooke Lenox is already taking aim at a return trip to the state meet in May. Colorado Track XC file photo by Alan Versaw.

It's been a while since anyone got a meet in here in Colorado, so let's celebrate with the successful completion of the La Junta Open! And, I've been dying to have some meet results to actually discuss, so please forgive me if I go a little overboard here.

I don't often discuss team results in meet review articles, but I'm going to here. The La Junta Open typically gives us a nice early look at some small-school teams, and this year did not disappoint in that regard.

Although Eads' enrollment is a mere shadow of what it once was, the Eagles still manage to cobble together some good track teams. This year will be no exception. And that includes both boys and girls.

Despite being up against several 2A and 3A programs, Eads posted 41 points in the girls division and 43 in the boys. Many of those points came from relays, but other notable sources included Miranda Mitchek with a 31-7 fourth in the triple jump, and Brooke Lenox winning the shot put at a little over 33 feet and the discus in 114-9. For the boys, Caden Parker took fourth in the 100 and won the 200 in 23.60, plus Dylan Dixon won the long jump at 19-7.5. So far, that's a few athletes short of making a serious title run on either side, but Eads will at least make a presence felt in the 1A state meet in May.

Hoehne's girls posted 60 points in the team scoring--a nice 2A total. And, it will be noted that came without Sophia Anderson, who moved to Paonia. The Farmers have a franchise.

Otherwise in team scoring, Alamosa swept the team titles, nearly doubling the point production of second-place Lamar on the girls side. It looks like another solid year for Mean Moose track and field.

If you're wondering about Isaiah De La Cerda, he of the state wrestling title last month ran 4:39 for third in the 1600. That time will drop.

Some other standout performances include a triple crown of event titles of Cheraw's Zane Bearfoot. Evidently, "Bearfoot" and "fast and nimble" are synonymous, as he won the 100, 110H, and 300H. A very nice early-season effort.

We'll also note here that Crowley Country freshman (!) Lane Walter won the discus at 135-2. This is Walter's second consecutive outing over 130 feet, and he currently stands at #10 in the national discus rankings for freshmen. But, you already knew that if you checked out the article yesterday about boys in the national rankings. Nor is Walter one-dimensional; he ran the 200 in 24.97.

Other marks that could hang around for a while include a 48-0 shot put winner from La Junta's own Vicente Ramirez, a 5-10 winning high jump from 1A Kendall Pelton of Cheyenne Wells (didn't the Tigers just graduate a dominant female high jumper??), a 5-2 winning high jump from Rylee Haynes of Crowley County, a 1:02.78 winning 400 from South Park's Sara Naylor, and a wind-legal winning 100 of 13.37 from Center's Malyka Medina.

Just a hunch, but in light of the performances and recent issues with getting meets in, I'm guessing a lot of coaches left this meet happy campers. Well done, La Junta!