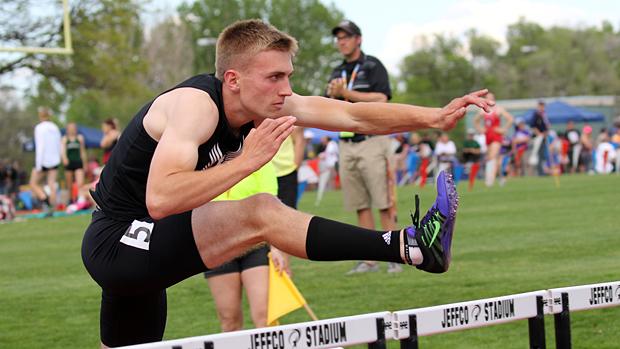 Matt Hanson was the picture of precision in the 110 hurdles prelims, and Lutheran is very much on schedule to repeat as 3A state champions. Photo by Alan Versaw.

While things didn't go exactly as the seeds suggested they might, the top teams seem to be holding out well enough that nothing much changes with respect to the favorites.

Lutheran did not advance Chris Youngs in the 100, but it may not end up mattering all that much. Kent Harris, Luke Arkell, and Harrison Tomko all advanced. Harris and Arkell advanced in the 200. AJ Thompson advanced in the 400. Matt Hanson, Kharon Hall, and Aaron Clausen each advanced in the 110 hurdles. And, Lutheran also advanced the 4x200 with the top seed into finals.

Meanwhile, Hall took the triple jump with the state's best mark of the year at 48-1.75. That mark also doubled as a new 3A state meet record. Adam Dawson, as expected, took top honors in the discus. And, the Lutheran 4x800 added a third-place finish.

Nothing about all that suggests Lutheran is in danger of being overhauled in the standings any time soon.

On the girls side, no telling blows were dealt, and things went well enough for the major players to stay in contention.

Peak to Peak carefully paced out a just-fast-enough 9:47 to win the 4x800. Sarah Yocum took the top seed from Kayla Pinnt into the 400 finals, but no points attach to that, and Moffat County had everything else go at or ahead of schedule, including a second-place finish in the 4x800.

Lily Tomasula-Martin took a win over Anna Shults in the 3200 that dealt a minor setback to the Peak to Peak Express, but the two points lost there do not yet appear to be that critical.

Eaton managed a third in the 4x800, easily advanced their 4x200 and SMR8, and got a big second-place finish out of Ana Scott in the high jump.

Perhaps another day will do more to separate the top teams, but each team should go back to the hotel--or their own beds--tonight feeling as if their state title dreams are very much alive.

In a much anticipated round one of a two-round distance battle, Ben Butler prevailed over Taylor Stack by an average of about one second per lap in the 3200. Lutheran's Morgan Barone finished her high school career with a high jump title. Victor Zimmerman did what was expected of him and left with a pole vault title.