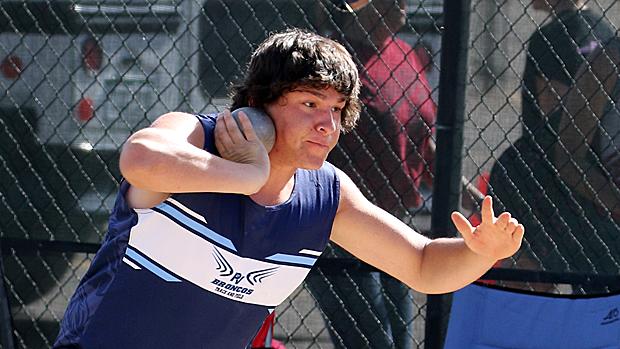 Parker Joens gets most of the ink in the Platte Valley throws program, but it was James Baladez (above) and Morgan Smith who pushed the Broncos over the top to becoming 2016's 3A Royalty of the Rings. Photo by Alan Versaw.

Now in the third year of awarding the "Throwing Titles" to the top programs in each of the five classifications, as determined by the total points a program accumulates at the state meet, it seems fitting to add commentary to accompany the simple compilation of points which we have seen in the past.

As it is often difficult to compare one classification to another, this article will break it down at each of the levels represented in our state; as well as, by gender since different schools have different ways of coaching their boys and girls programs. But, since the goal is to find the top overall programs, this article will address the issue from an overall combined perspective as well.

In the girl's competition, Coach Trey Eder's Eads Lady Eagles, Brook Lennox and Mariah Smith, were able to combine for just enough points with their three top 3 finishes to best Sangre de Cristo's dual champion, Jenna McKinley; giving Eads a second consecutive nod as Queens of the Rings. On the boy's side, the might of dual champion Andy Borunda, and his throwing partner Keith Tate, overwhelmed the field. The twenty points form Borunda's two first-place finishes combined with Tate's fourteen from his second place finish in the shot and fourth place finish in the discus resulted in the Longhorns out scoring their nearest competitor by 24 points. On the strength of these performances, Springfield could have won the overall title without any help from the girls, but Ally Loflin contributed four points from her sixth-place finish in the discus to secure the second straight overall title for the Longhorns. Zachary Horning of Sangre de Cristo contributed eight points to the twenty scored by McKinley to secure the overall silver position for Thunderbirds.

The real competition in this classification amounted to a battle of the sexes as the John Mall Panthers and the Burlington Lady Cougars easily outstripped the competition to claim the titles of Kings and Queens of the Rings.  Anton Watson and Ryan Dewald of Resurrection Christian combined for ten points and posed the biggest threat to the John Mall boys who bested them by 25 points. The dual titles for Garrett Quintana and the silver added in the disc and bronze in the shot by Andrew Vigil won this competition easily. Likewise on the girl's side, Burlington's top challenger was their neighbor to the north on highway 385. Coach Suzanna Cure's Wray Lady Eagles, Hannah Lenz and Morgan Smith, placed third and fifth, respectively in the discus, to garner 12 points and second place the girl's competition. For the second year in a row, the overall title in this classification came down to the boys from Walsenburg and the girls from Burlington. Like John Mall on the boy's side, Coach David Jacobsen's female squad featured a duet scoring in both events. Senior Miryah Jones finished fourth in the disc and ninth in the shot, while Junior Ellie Berry claimed gold in the discus and bronze in the shot, earning the Cougars 24 points.  Burlington would garner another point in the boys shot, but ultimately fell short of a repeat, allowing the RMAC bound duo from John Mall to claim their 2nd overall title in three years.

On the strength of their depth, last year's overall winner Eaton claimed the title without winning either the boys or girls competition, but the graduation of several male athletes meant the hope of repeating would rest heavily on the performance of the girls squad. With the top female thrower in the state leading the Fightin' Reds, Eaton was able to amass 26 points to win the title of Queens of the Ring topping the 13 points accumulated by Peak to Peak's Tessa Anderson who scored a second in the disc and fifth in the shot. Eaton's Tarynn Sieg claimed the gold in the discus and won her second straight shot put title, setting the State Meet record in the process. She was joined in the scoring by Caiden Rexius and Hannah Bott giving the squad a victory with 26 total points. On the boy's side the Lutheran juniors Jacob Dack and Adam Dawson claimed the shot put and discus titles, respectively. However, as they both specialize in one event, they were unable to keep up in the point total with Platte Valley. The Broncos claimed the Kings of the Rings title behind the performance of Parker Joens and James Baladez. Joens claimed the silver in both contests, while Baladez picked up a fifth and sixth place finish giving Platte Valley a total of 25 point compared to Lutheran's 20. The twenty-five points from the Platte Valley boys would not be enough to top the twenty-seven by the Eaton girls for the overall title; however, both of these squads had additional entrants. Eaton scored a single point on the boy's side, while Platte Valley's Morgan Smith proved the difference earning six points in the disc and two points in the shot, giving Coach Julie Thomas's program its first overall title to pair with back-to-back boy's titles.

Class 4A has been unique in the several ways. For one, it has been possibly the most fluid classification with different teams appearing in the top two, every season. In fact, looking back on the previous years, there has never been a single team appear in the top two more than once. This is possibly because of the other unique trait of the class; the dominance of a single thrower in a program. In this year's competition on the boy's side, that thrower was Conor Bertles of The Classical Academy.  Bertles won the shot and place sixth in the disc causing TCA to outlast Sam Distel of Montrose who finished with twelve point thanks to his second-place finish in the disc and his sixth-place finish in the shot. It's worth noting that Beau Gordon of Pueblo Central and George Silvanic of Palmer Ridge just missed placing their teams in the top two, despite their finishes high up the podium. In the girls contest, three throwers contended to put their program in the top position. Raquel Valdez of Mountain View won the disc and placed second in the shot; conversely, Lily Lockhart of Delta placed second in the disc and won the shot. Logan Prater finished third both competitions, leaving Widefield four points back of Delta and Mountain View, but the pair of eighth place finishes by Logan's sister Riley created a three-way tie for the top program.  In order to win the overall then, these throwers would need the assistance of a thrower from the opposite sex. The top male programs, TCA and Montrose would find no help from their female throwing partners, but top girl's programs Widefield and Mountain View would. Widefield picked up five points from the fifth place finish by Nathaniel Miller in the shot put to bring their overall total to 23.  Mountain View would do better, adding 9 points from Scott Sipes finishes in the disc and shot; earning them the overall title by four points.

If 4A is the story of parity, one program has dominated the 5A overall title for the past two seasons, and again this year Rocky Mountain High School found their program near the top; though denied the three-peat. In 2014 the Lobos, led by their boys, captured the title over Fort Collins. In 2015, they won on the strength of the girls. And this year Gabriella McDonald's victory in the shot and silver medal finish in the disc created a tie for the Queens title with the Fountain-Fort Carson duo of Gina Coleman and Mariah Fualau. Coleman captured the disc title, and the pair finished with a fifth and seventh finish in the shot to create the shared title. Rocky Mountain would add nine points to their overall total behind the performances of two shot putters which placed the Lobo boys in the third position of that competition.  The performance of the Chaparral discus champion Jacob Condill landed the Wolverines in second on the boy's side, but it was Pomona, led by their boys, who would deny the three-peat by winning the Kings title as well as the overall. Pomona took a lot of throwers to the State Meet, and many of them placed. Jake Moretti paced the Panthers winning the shot. He was joined on the podium by Isaac Lopez and Clae Walters meaning the Pomona earned 17 points from this single event.  Brandon Micale place fourth in the disc bringing Pomona to the Kings Title total of 23 points. To beat Rocky Mountain's 27 points, the Pomona boys need the help of Hannah McClure, whose fifth and sixth place finishes proved the difference and provided the Panthers with a five point edge in the overall competition