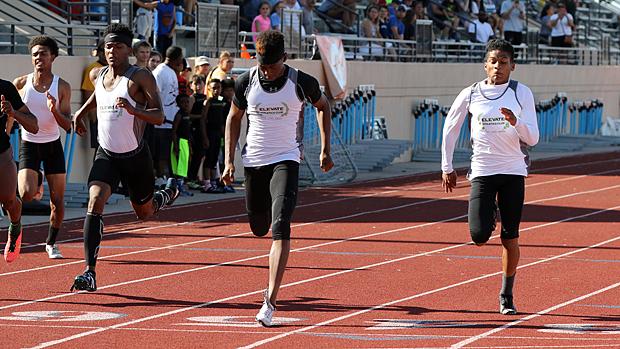 It was supposed to be a youth meet, but a couple of pole vaulters stole the show--at least temporarily.

With the Olympic Trials looming, everyone teetering on the edge of making it has been looking for one last big mark to push them over that edge into the trials. Both Cale Simmons and Sam Pierson found that one big mark. Pierson cleared 18-5.25 and Simmons 18-9.25. It's not every day you go to a youth track meet and end up seeing pole vaults of that kind of magnitude.

Elsewhere, it was a youth meet, though the numbers have thinned out a little as the summer season has reached deep into June and a fairly substantial number of those who began the summer with some track and field left to work on have shut it down. 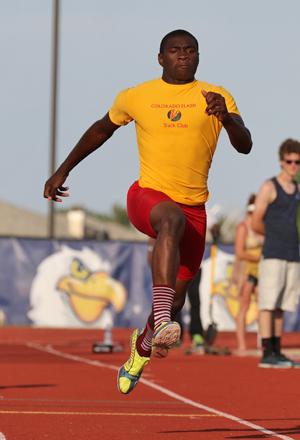 Highlights from the boys side of the competition included a 1-2-3 sweep of the 17-18 100 by Vista Ridge, er... Elevate Athletics, followed by a 1-2-4 in the 200 later in the evening. Doing the honors were Desmond Calhoun, William Haywood, and Anthony Bellot. Calhoun won the 100 and Bellot the 200. Considering the wind in their faces, the times were pretty solid as well.

Ta'Mar Wilson )photo, left) owned the 17-18 horizontal jumps at 22-11.25 and 45-3.75. Wind readings were long kept on the horizontal jumps, as has been the USATF-Colorado standard for a couple of summers running now.

Max Manson had the best pole vault of the non-OT hopefuls, clearing 14-8 on the evening. 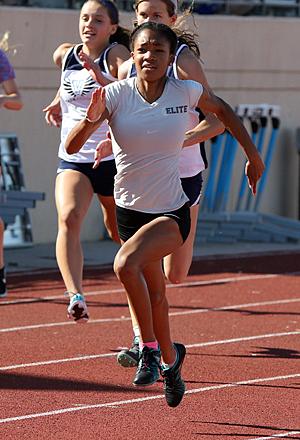 Digging a little for gems in the 13-14 crowd that we'll soon be seeing in high school, Kameryn Brown (photo, right) swept the 100 and 200 with solid times that would have been even better but for the negative winds. Camille Peisner and Taylor James dropped some times that suggest they'll be helping some folks out soon enough in the high school ranks as well. The same could easily be said of Katelyn McMoore about her winning marks in the 100 hurdles and high jump. Among the boys, Justin Reynolds dominated the 100, and added a commanding anchor leg of the 4x100 to leave his mark on the meet.